How do we fine-tune and personalize a modern VR park, to differentiate it in the marketplace?

In 2017, Telenet – one of Belgium’s biggest telecommunication and entertainment providers – decided to put up a media innovation project, in order to keep their finger on the pulse of modern entertainment. In a world where streaming platforms, video game competitions and virtual reality are quickly becoming the new norm, Telenet asked themselves how they could maintain their pioneering position in today’s media market.

The question they put forth was: what is the future of entertainment, and how will people consume entertainment in the coming years? Looking for an innovative answer, they tasked corporate venturing firm Bundl which looked deep into market dynamics and landed on the concept of a virtual reality park. Sooner than later, Bundl would also give Bump a call.

This indoor park, simply named The Park, would become a free-roaming, phygital (physical meets digital) virtual reality experience, tailor-made for friends, families or colleagues. The idea was to construct a high-tech entertainment playground that focused on interactive team-building. 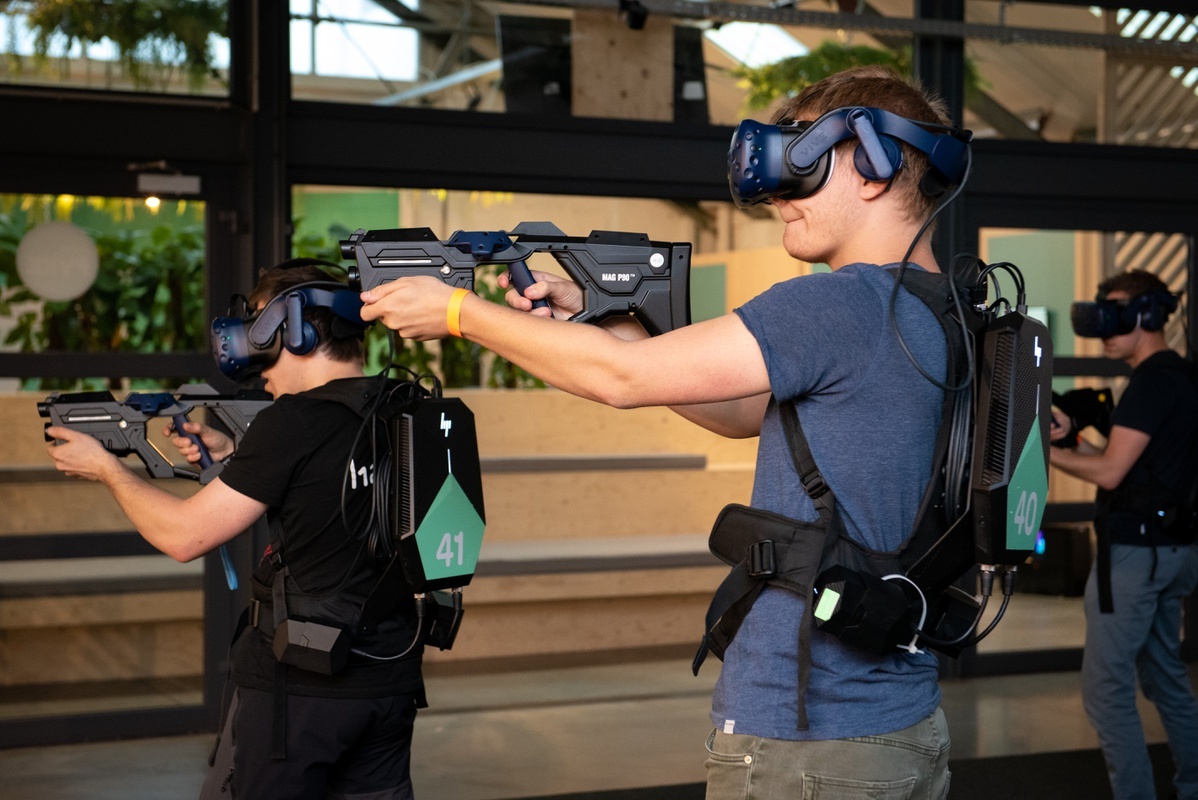 In The Park, people are dropped into a virtual world full of action-packed adventures. The location-based VR experience is free-reign and has no set rules: people can determine a game’s outcome themselves with on-the-spot decisions. It’s a detailed immersive group experience, full of surprises, played in a life-size setting.

In order to fine-tune The Park and give it the right atmosphere, design aesthetics and branding characteristics, Telenet and Bundl contacted Bump to put the dots on the i’s. Which we gladly did and continue to do across the Park’s several locations in Belgium and soon in the Netherlands.

Our main challenge was to make The Park stand out against other VR playgrounds. One of the most important aspects was that The Park had to focus on team-based group experiences, instead of individual customer journeys. We didn’t want it to radiate a geeky technologist gamer vibe, but rather represent an open and accessible experience for anyone to happily get lost in.

The key features to differentiate The Park in the VR market came down to an added sense of aesthetic and subtle coziness. The venue setup and its interior branding were essential, so to speak. We made sure to use the necessary cutting-edge technology (the ideal hardware and supporting software) to guarantee customers an experience based around a fluid gameplay flow. 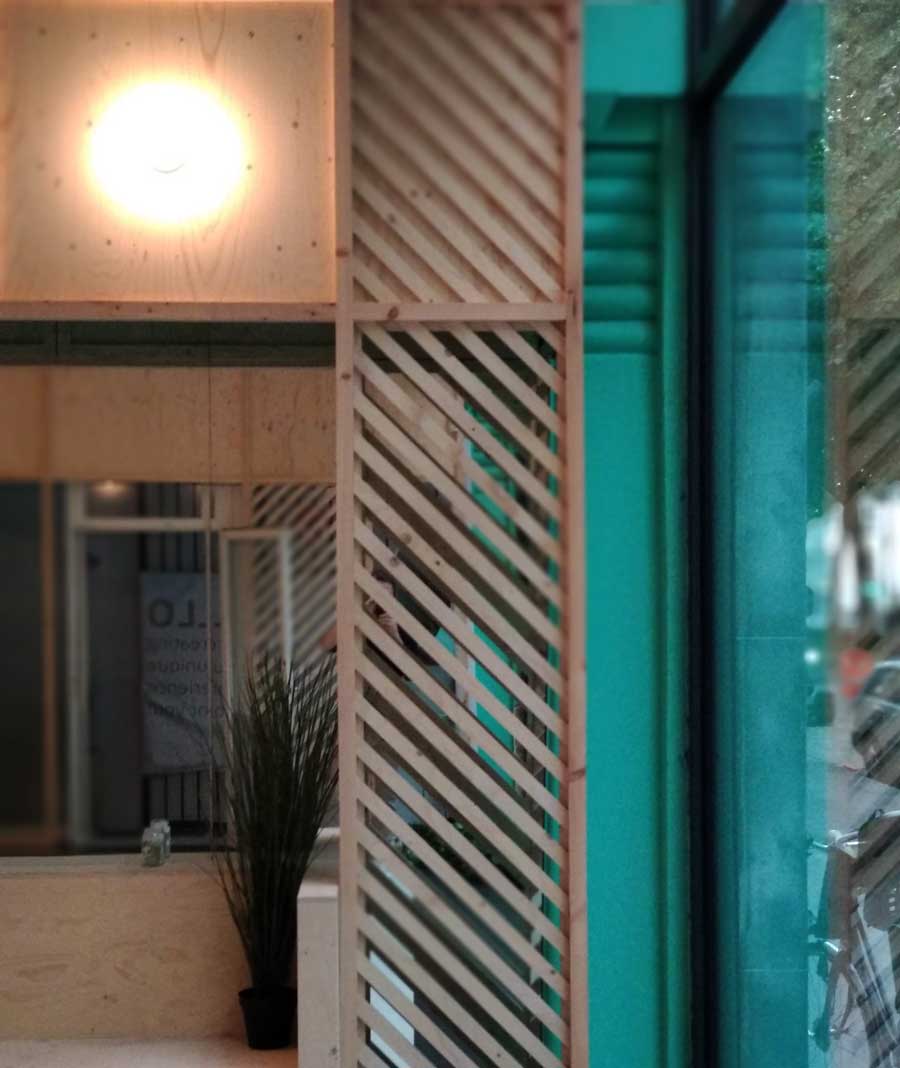 A lighter shade of green

The first Park that was opened, in Antwerp’s busy Belgiëlei street, is a big hangar with high ceilings that lends itself perfectly to be used as a big playing room.

One of the main ideas behind the first Park was to highlight the social characteristics of VR interaction. Therefore, we had to keep its image as fresh, positive and easily consumable as possible, opening up its accessibility to the non-gamer mainstream. We consciously decided to use a non-techy, summer bar-like look ‘n feel, to broaden the target audience. Attracting not only gamers and tech innovators, but especially company teams and general groups of friends was the goal.

We used a minimalist but striking spatial branding to anchor The Park’s visual identity. The logo is presented in two types of green, stickered onto the linoleum floors, the walls and the mirror at the entrance. These shades of green are also worked into the stand-alone furniture: we had the gaming booths, gear racks, bar counter and matching stools finished in light polished wood. The combination of the wood and the soft green colors gives the space a light and pleasant vibe. This is helped by the use of various plants in trays, hanging racks and on the bar tables, illuminated by fitting atmospheric lights. 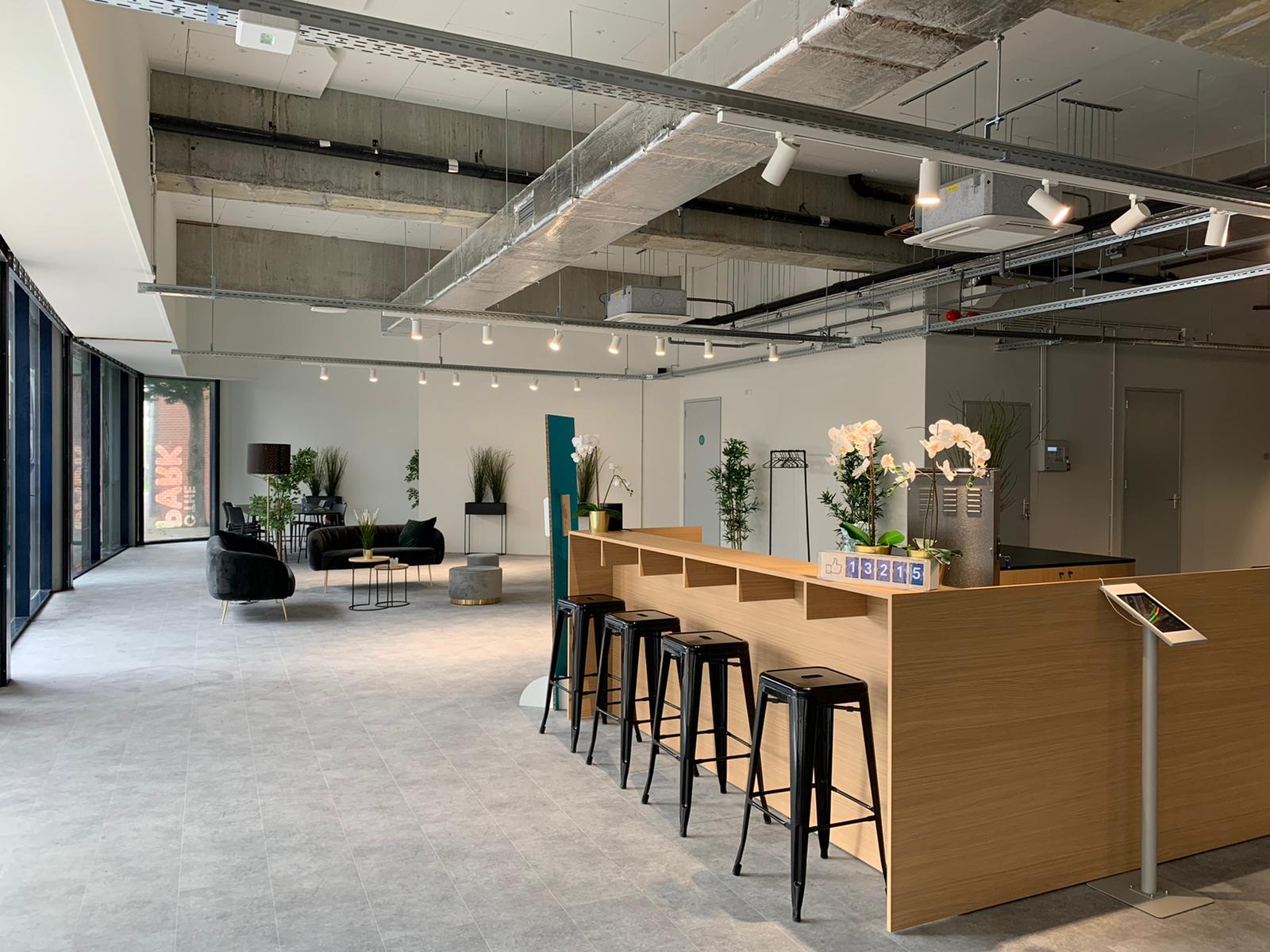 The order in which people enter The Park is key to achieving the right mindset. We mapped out the space in four main areas, spontaneously guiding people along.

In the welcome area, we set up a comfy bar with a modern counter and various seats to have a drink and a chat. This bar is “the face of The Park”, so facing the street is a big window that can attract passersby. At the adjacent reception, visitors can log in to start their virtual adventure.

The second room is the Demo Area, which presents the wooden booths with intro games and other mini game samples (such as 3D painting). This area works as a teaser to get people – many of which are about to have their very first encounter with VR – in the right mood. The games can be played individually or with up to 4 people, to get some team spirit stewing.

Next to this is the Park Lounge, a large wooden lounge deck where players can relax or watch others’ games in the surrounding areas, thanks to the central big window.

Finally, the Free Roam Area is the main game room, a big space of 200 m2 with high ceilings, where up to 5 people can simultaneously move around and encounter 360° VR sceneries with 3D layers. When entering this area, people first get an introduction by a host and are handed their VR-Gear, consisting of an HP backpack PC, a HoloLens helmet with VR-glasses, and a virtual gun. Again, this gear is presented on purposely designed light wooden racks, finished in a light shade of blue, matching the rest of our snappy interior design. 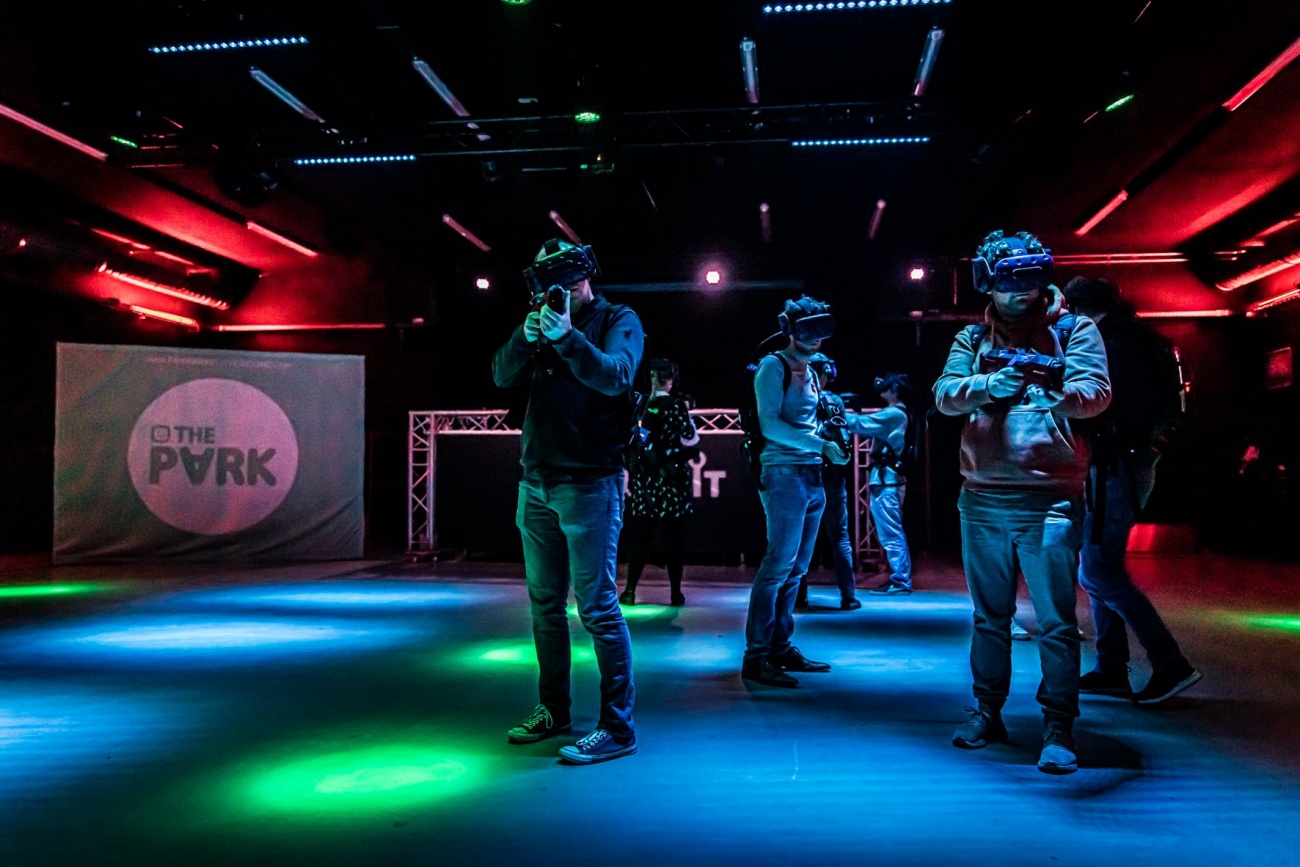 The Park in Antwerp turned out to be a huge success, so three other venues followed in Ghent, Hasselt and Kortrijk. For these Parks, we followed through on our design style, making only subtle improvements along the way (little plants that were embedded in the gear racks, for example). The Park in Kortrijk also started a collaboration with the local game school Digital Arts & Entertainment, which has been voted as the best game school in the world for 2 successive years now. 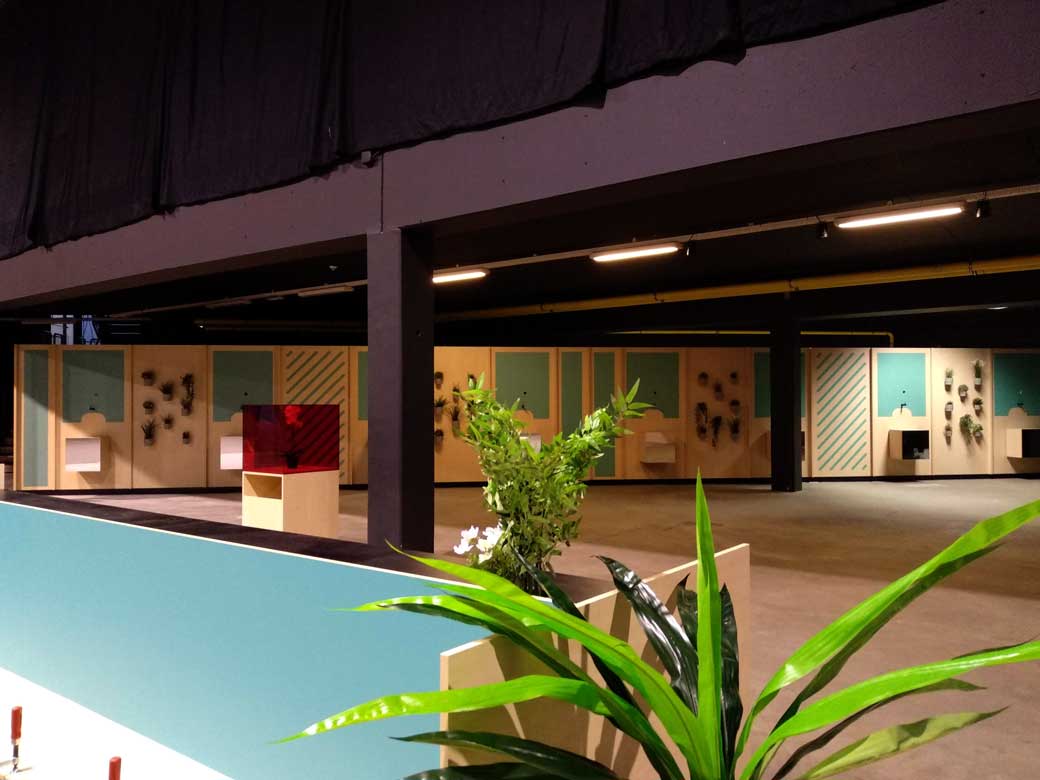 The most important evolution we worked on however, is that we turned the game consoles that were used into modular packages, that were internationally transportable. The Park was looking for a basis to keep evolving and integrate their game modules in other contexts and locations as well.

The challenge was to fine-tune the modules with the finished games into even smarter and extra well-designed packages, so we could eventually sell and ship them abroad. Therefore, the consoles had to be made more compact and lightweight for travelling purposes, but also less technical, more user-friendly, well-designed and affordable, to convince franchisees and other collaborators. And it worked: so far, game modules have been spread out as far as the US, the UK, the Netherlands, Germany and France. 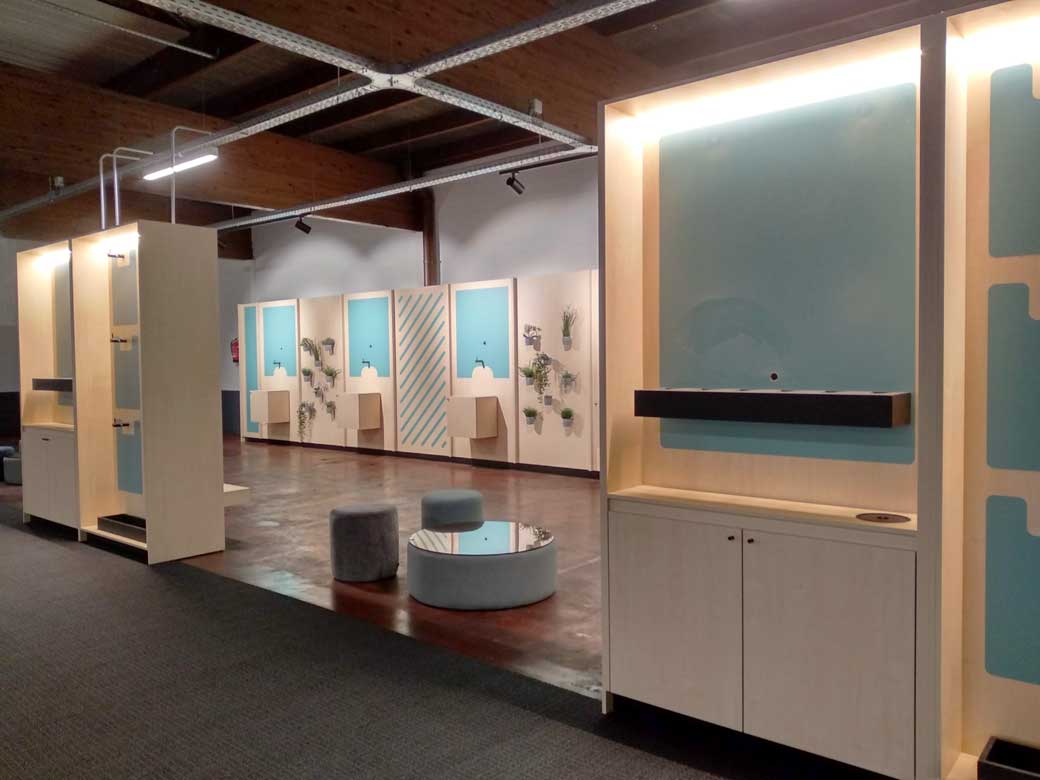 A big project like The Park can only be realized with a firm collaboration between various companies. Telenet did not only start and fund the initiative, but they were also part of the follow-up team along the way, constantly discussing things and giving feedback. Bundl ideated the concept, worked out a business case and focused on the necessary market research, in collaboration with investment platform 9.5 Ventures. The cameras and software used in the Park buildings were managed by the company HTC, and for the moment, The Parks are managed by game studio Triangle Factory, who also continue to design new game concepts for it.

From the start, we were part of an organized industry expert panel that went back and forth to land on the best possible ideas. This panel included people from all of the enterprises listed above, as well as representatives from the Tomorrowland festival, virtual reality agency Yondr, sports complex Garrincha, software provider Wappla and media company Woestijnvis. 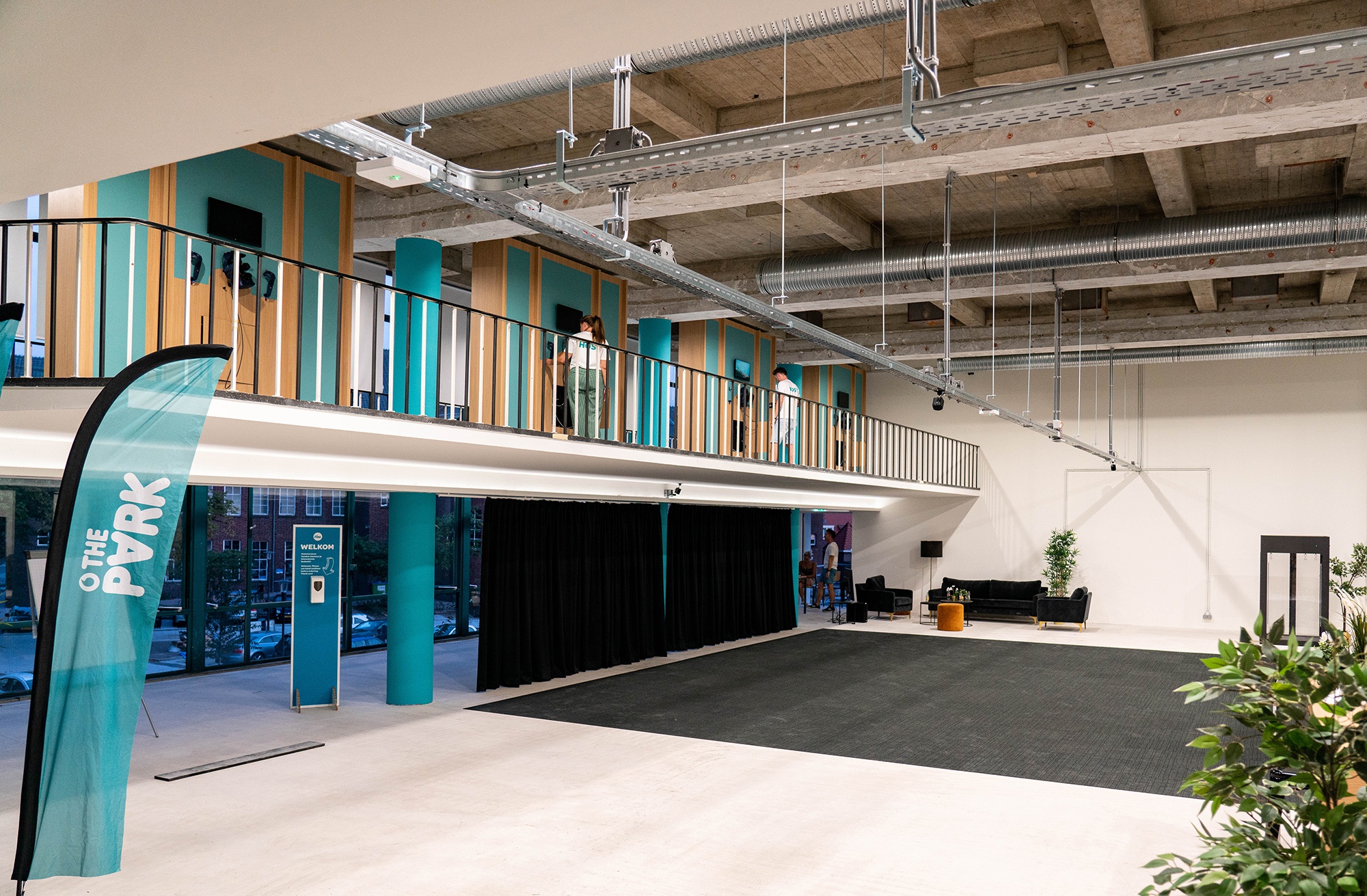 The Park has emerged as a hugely successful undertaking: moving from concept to actual business in just a year, becoming profitable just six months after the opening.

Telenet ended up with their goal accomplished: a modern type of group entertainment that mirrored their business values and visions. They even adjusted content to context by producing a Park-game with a story concept based on one of their own TV shows, called ‘De Dag’.

With more than 50,000 customers in its first year alone, the Park offers three games across four venues with more in the works, The Park can be said to offer a full end-to-end user experience, from the moment people walk in the door, up to the rush they feel after they’ve finished their game and enjoy a drink in the bar.

Curious? Understandable. Have a closer look at www.theparkplayground.com!