How do we design an aesthetic landmark that defines the identity of Antwerp’s North district? 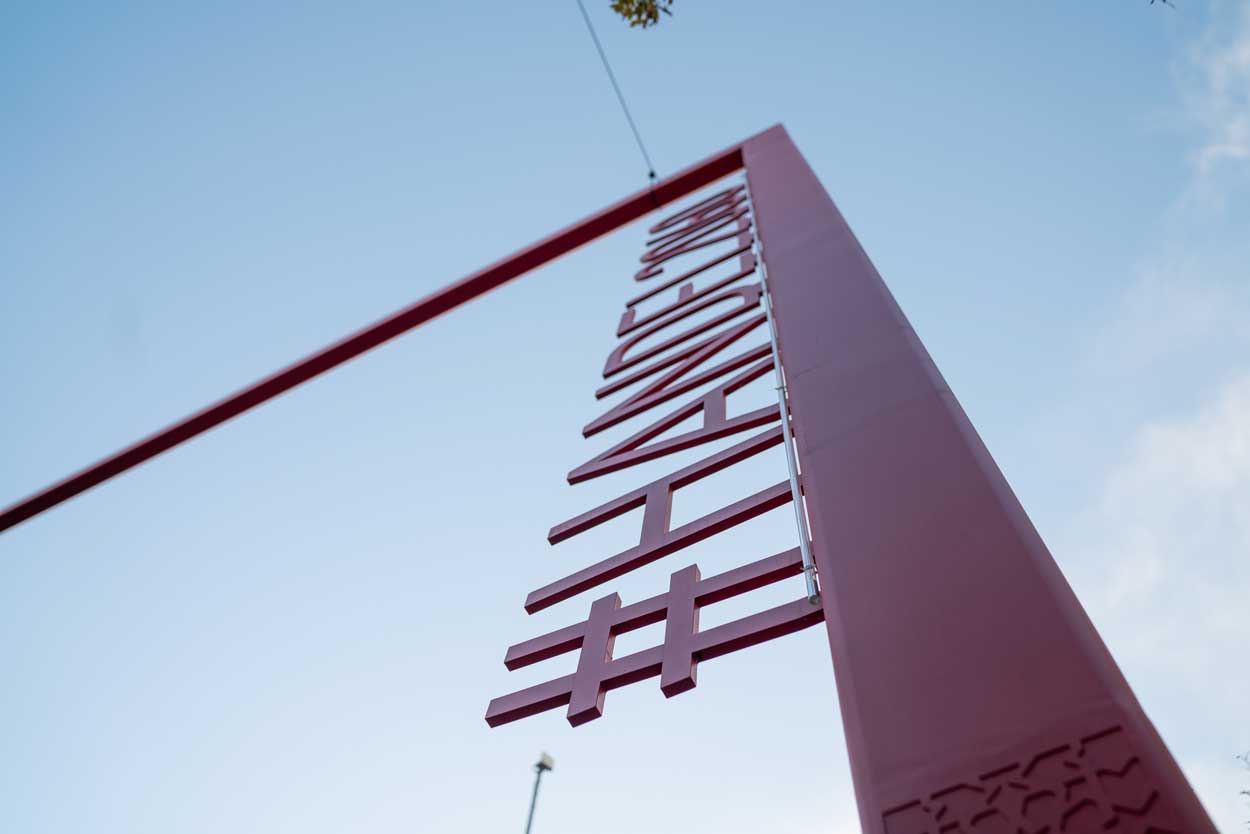 The Handelstraat, the main shopping street in Antwerp’s multicultural North district, was given a complete make-over in 2018. The public area was renewed with added trees, bus stops and broader lanes for pedestrians and cyclists. This resulted in more road safety, as well as a push in commercial benefits for both customers and traders.

To highlight this renovation, the city of Antwerp was looking for a new landmark that would give extra stature to the street’s (and the district’s) identity. As architectural experience designers, our goal was to come up with a design that enriched its scenery – modern yet timeless, striking yet classy.

Before getting to the concept of the design, there were a couple of questions we needed to tackle.

First of all, we focused on identity. What defines the Handelstraat and sets it apart from other shopping streets? And equally important: how can our artistic landmark stress the street’s unique character even more?

Aesthetics are one thing, but functionality was not to be ignored. Therefore, we made sure to implement the landmark in a practical and safe manner, as a dynamic (and even interactive) benefit to the public domain.

Finally, sustainability was key. Eco-friendly materials had to go hand in hand with a solid and durable construction. Well… of course.

So, how do we set off creating a specific landmark in the city? First, by focusing on its surroundings.

Specifically, the Handelstraat is a crowded and lively but slow-paced shopping street, souk-like and filled to the brim with international traders, suppliers and tourists. The city’s street renewals make for more organized traffic and add extra breathing space to the often ware-filled sidewalks.

These improvements will benefit all of the street’s residents, strengthening their pride and identity. Therefore, we figured the street’s visibility and updated accessibility should be highlighted with a unique, modern and easily recognizable symbol. 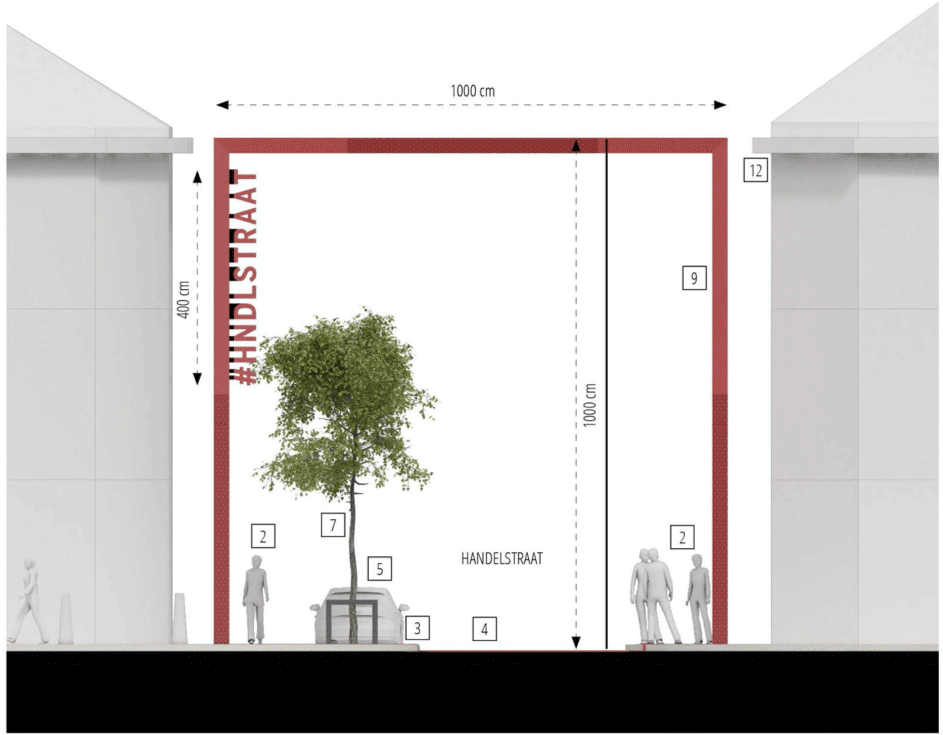 Open gates (to a third dimension)

With all this in mind, we designed two elegant gate constructions, to be placed at both ends of the street as recognition posts. The gates consist of a minimalist, striking red steel frame: overtly present in a refined way, always open and welcoming, encapsulating and defining their inner area.

The lively red color of the steel nicely connects to other characteristic Antwerpian landmarks, such as the one in the Brederodestraat in the Southern district.

We decided to add a decorative element to the gate poles: a subtly engraved ornamentation of an abstract Arabian motif, referring to the street’s deep historical connection to North-African culture. 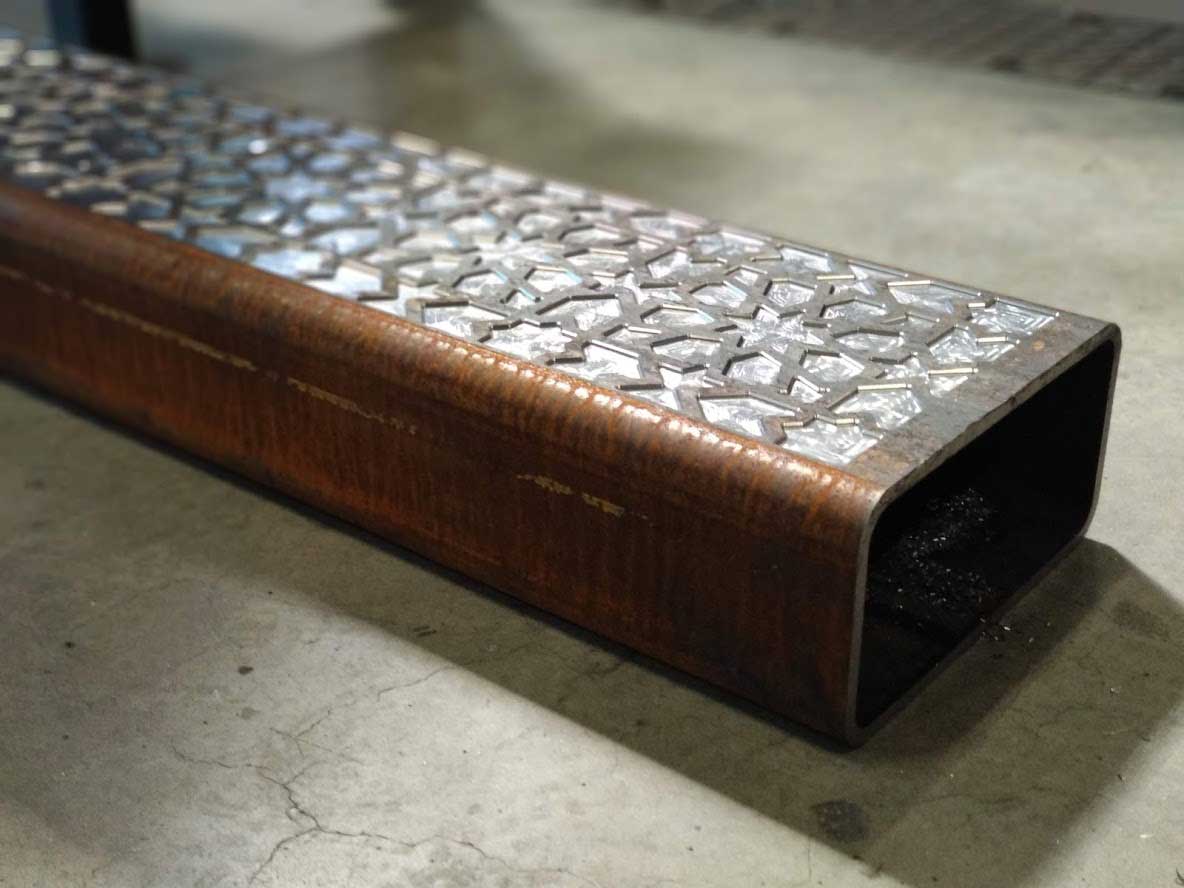 On top of this, we wanted both gates to sport a life-size letter word, in cut-out steel. This word could then function as a code word (and hash tag on social media) for the 2060 city area it represents.

As a whole, the open gates should stress the idea of the Handelstraat as a dynamic three-dimensional public area and commercial axis, with a renewed sense of character.

Adding all these elements together, we presented our total concept to the city council.

Our propositions were judged by a professional jury, consisting of delegates for the Antwerpian district, the Urban Development unit, and the merchant unit. They were joined by the city’s project manager for Public Space, the center manager for the North district, and an external representative for the BIDS-commission (Beeld in de Stad).

Aesthetically, technically and financially, our design proposal was met with an unanimously positive response. The concept, practical planning and timing were fully aligned with the city’s demands, so we got in touch with the necessary material experts and stability engineers.

Once we started off, there was an extra aspect we wanted to focus on: social involvement. To make sure the landmarks promote the sense of unity among the street’s residents, we decided to let the local people participate in the choice of the already mentioned cut-out steel hashtag.

Via an easily accessible online poll, set up in collaboration with the city council, the district’s residents were able to choose their favorite hashtag from the suggestions shown underneath. The top three choices would be discussed and selected with the city authorities.

The final choice – hashtag #HANDEL2060 – was laser-cut out of steel and fit to both gates. The three-dimensional letters are galvanized and lacquered with a powder coating. This way, it functions as a permanent banner – lit up by waterproof LED lights at night. 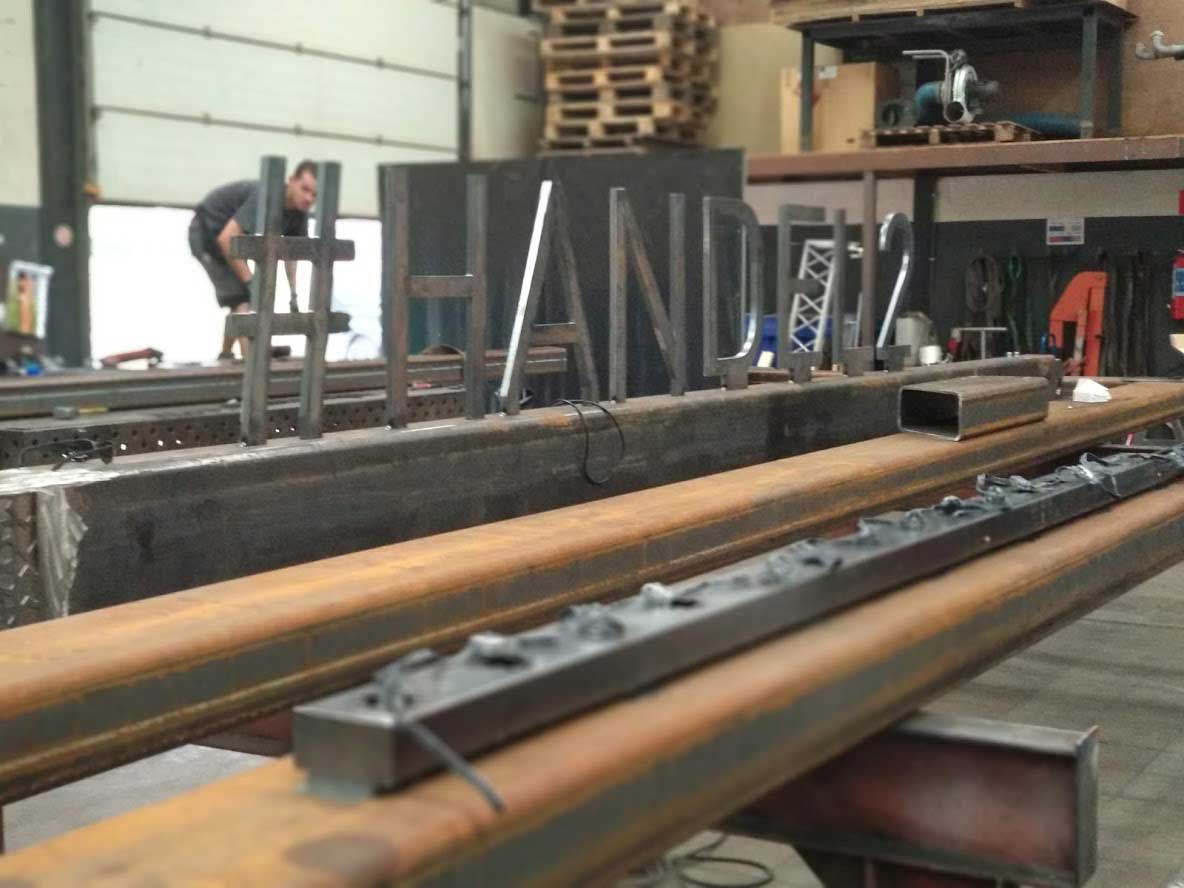 As an extension of social involvement, both the city council and the local traders also wanted the Handelstraat to become more child and female friendly.

We stimulated this by implementing a game element to one of the gate poles, based on light sensors. This way, we can attract people to actively interact and even play with the landmark.

One of the gates contains star-shaped built-in lights that can be manipulated by passengers.

Sensor circle plates on the ground can be jumped on at the foot of the gate. The order and speed in which these sensors are activated will change the color of the built-in lights, allowing people to make the gate pole light up in various ways. 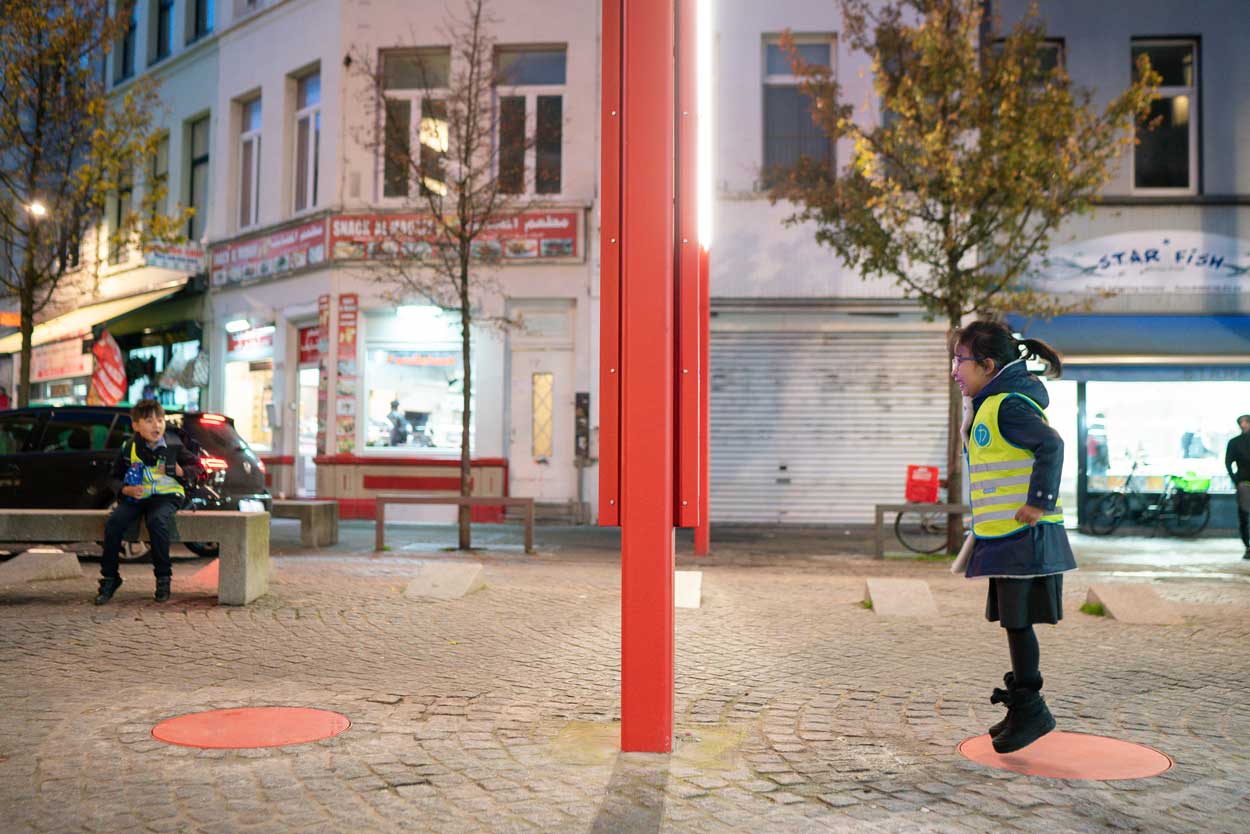 The art of sustainability

To meet the city’s ecological demands, we made sure to approach our material use and waste management in a sustainable way. Therefore, using strong steel was the perfect option.

Steel has a long lifespan, is maintenance friendly, and manufactured industrially with hardly any construction waste. It partly consists of used steel scrap, which lowers the need for iron or coal, without compromising its high quality. Byproducts such as blast furnace cement, gas and water are always reused, via innovative production techniques that scale down emissions or energy consumption.

Finally, the added layer of red powder coating strengthens and protects the steel against corrosion, acid rain or even vandalism. 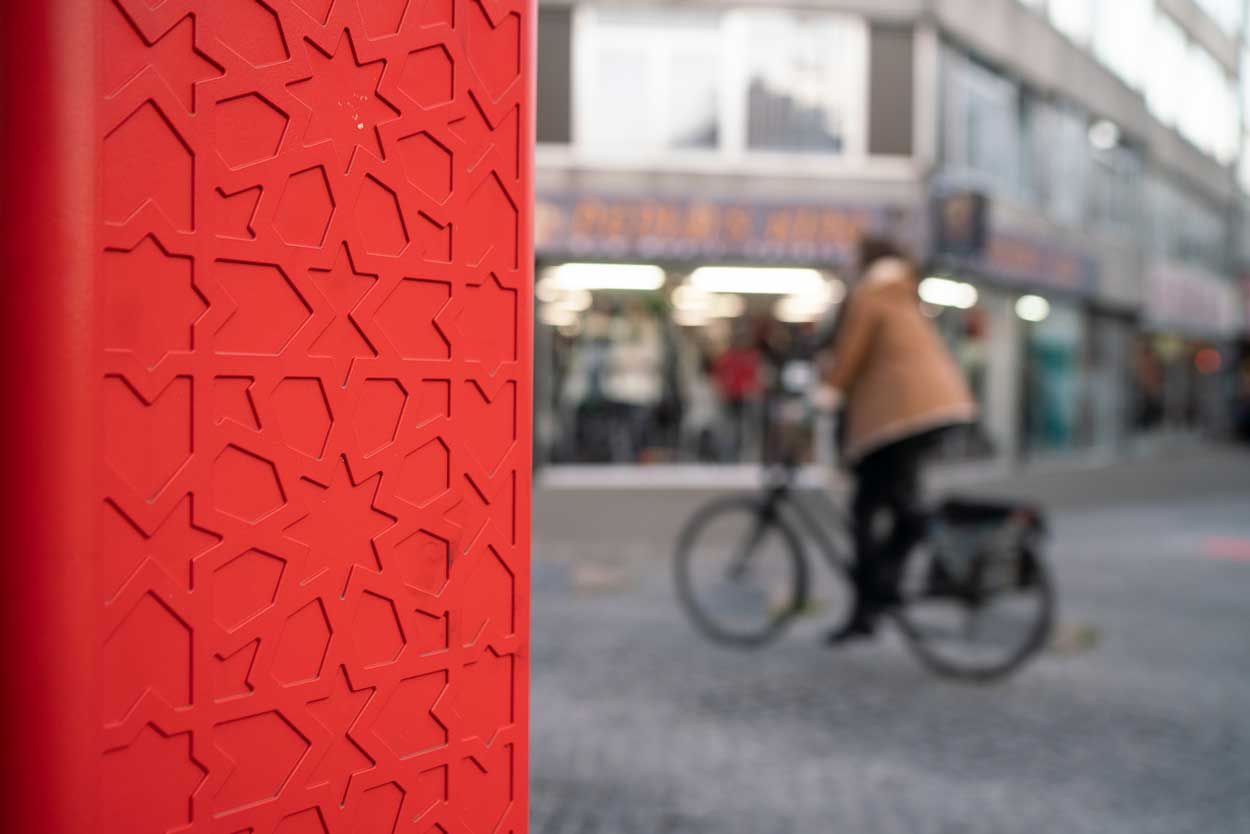 Size-wise, our landmark is quite a large design piece: the gates measure 10m by 10m. They consist of rectangle-shaped tubes, built out of 8mm steel plates that are welded together. For construction, both gates were transported in three separate parts (the left, right and top tubes).

To ensure stability for this big structure, the necessary concrete bases were cast underground in the sidewalk, with precisely placed assembly bolts, next to the city’s utility lines.

Three options were considered for the construction, of which the first one was chosen in consultation with our stability engineer and the city council.

Integration is a verb

Keeping pedestrian, cyclist, car and bus movement in mind, the two gates were consciously placed on the street corners, outside of the traffic ramp.

Sidewalk, roadway and parking lanes are all contained within the scope of the gate poles. Both gates are aligned with each other, and exactly as high as the cornice height of the surrounding buildings, turning them into a perfectly integrated part of the street’s public area.

Since the hashtags on the gates are also readable on both sides, it stresses the feeling that the Handelstraat doesn’t have a clear starting or end point anymore: it has now become a unique multi-directional lane, defined by its welcoming gates on both sides. 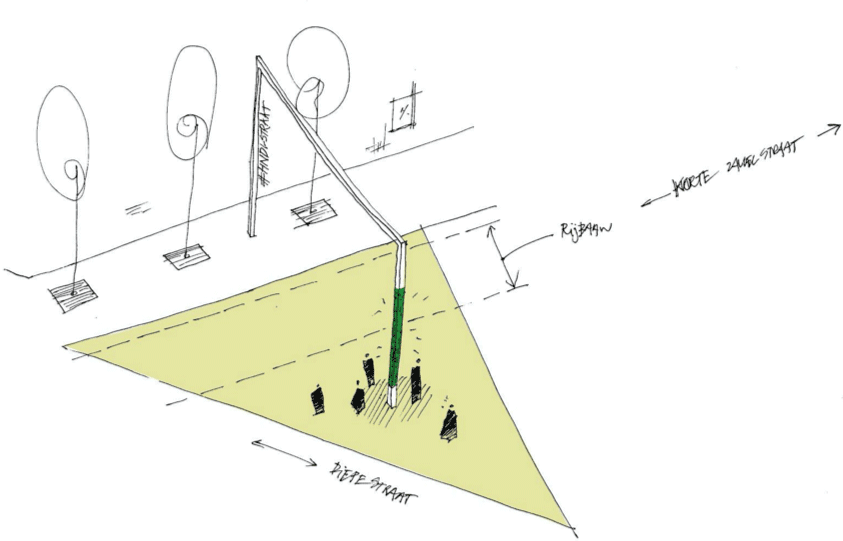 We cooperated with a skilled and experienced construction team, to guarantee a smooth and responsible realization of the gates. As designers of unique architectural experiences, we at Bump took up the main responsibility and contacted two reliable partners.

To tackle the stability engineering, we teamed up with Dieter De Jongh of SMB, a Belgian independent architectural engineering office that specializes in calculations for construction works.

All welding, montage and placement work was done by the skilled crew of Laswerken Sprangers BVBA, with the tasks being coordinated by manager Wim Sprangers.

In collaboration with the city council, we went back and forth during meetings and consultations to work out all the necessary technical arrangements and finally put the landmarks on the spot.

Ready for the launch

After months of technical and practical work, the two Handelstraat landmarks were officially launched.

Their stylized and striking aesthetic add an iconic and interactive element to the street and its residents’ identity. On top of this, the clear presence of these durable gates also adds to the safety of the local traffic, further raising the charm of this unique shopping street.

Multiple advantages for the price of one? There you have it. 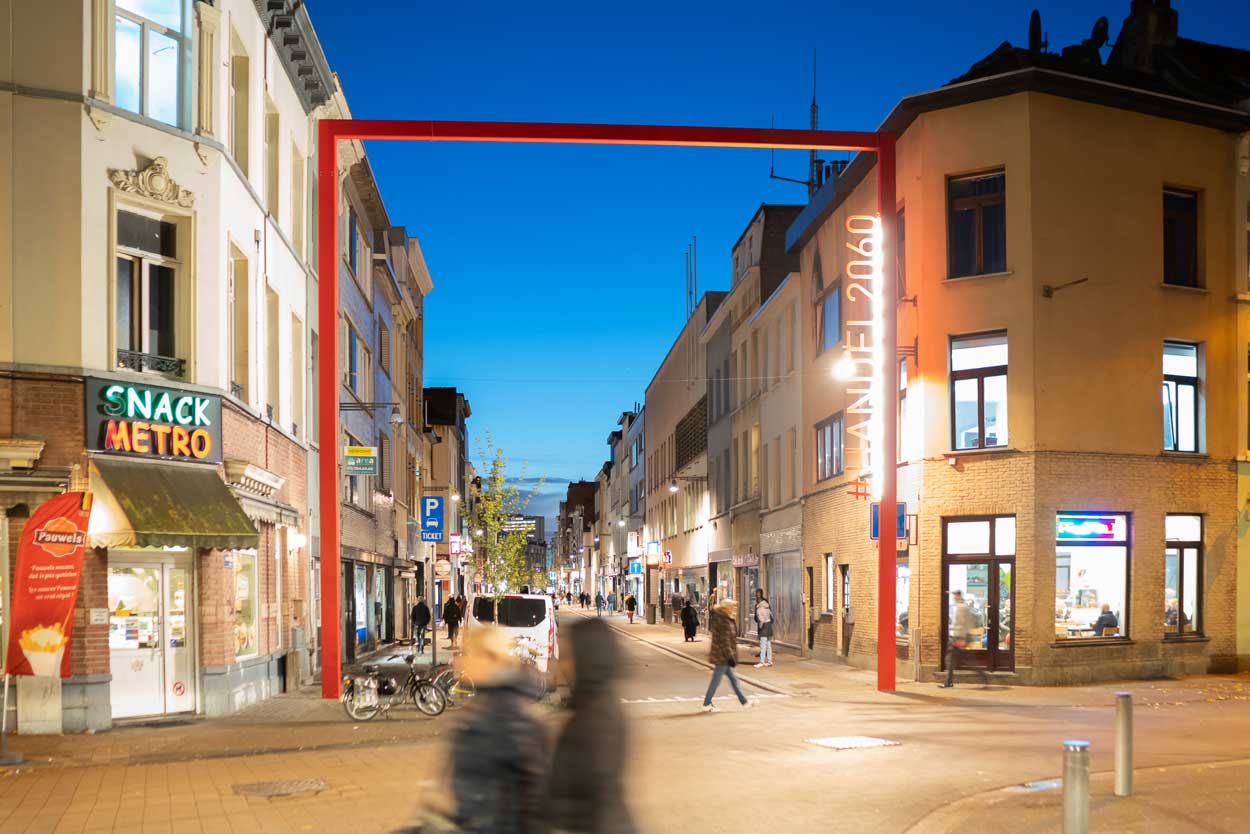