When an online bank needs a physical manifestation to attract new clients, how do we set this up?

Hello bank, an offshoot of BNP Paribas Fortis, is a modern type of online bank without physical offices, that focuses on young customers. In 2014, they were looking for a temporary pop-up space, to address and unite the so-called ‘offline identity’ of their target audience.

By organizing various attractive activities (such as contests or workshops) in this pop-up space, they would address new potential customers. Thanks to the presence of modern equipment, Hello bank could offer clients a modern hi-tech experience and make them feel as part of a costumer community.

This pop-up space concept would appear first in Antwerp, and later in updated and even more refined form in Brussels and Liège. Set up by trend research office Trendwolves, our job at Bump was to tackle the tech-savvy interior design, overall aesthetics and general atmosphere of the spaces – offering visitors a different sort of banking experience, and thereby improving their sense of service.

The space (in between)

The strategy and ideation for the Hello bank pop-up spaces was done by Trendwolves, a communication agency from Ghent that specializes in trend research and strategic marketing, focused on youth culture. Their usage of trendy tech visualized Hello bank’s cutting-edge approach to banking.

At Bump, we zoomed in on spatial branding: how do we furnish the pop-up space in the most fitting and striking way, and how do we present the necessary hi-tech applications within a fitting and unique interior design? A conceptual integration of tech elements, if you will.

Another challenge was to make Hello bank’s brand identity stand out in an easily recognizable way. To make this all happen, we came up with a specific combination of design features.

The location of Antwerp’s pop-up space was a corner shop in the city’s biggest shopping street Meir. We knew straight away that we wanted the decoration to be minimalist and striking, with purposely situated props that jumped out. Outside the building, a giant publicity banner was put on the facade.

Inside the space, we designed an atmospheric green wall just above eye-level, made of succulent plants, like an easeful vertical garden. As a stark contrast, underneath would be a 9 meters long, light wooden info desk, with interactive touchscreens and tablets for clients to scroll through. This counter functioned as the central element of the space, being an eye-catcher as much as a primary meeting point. 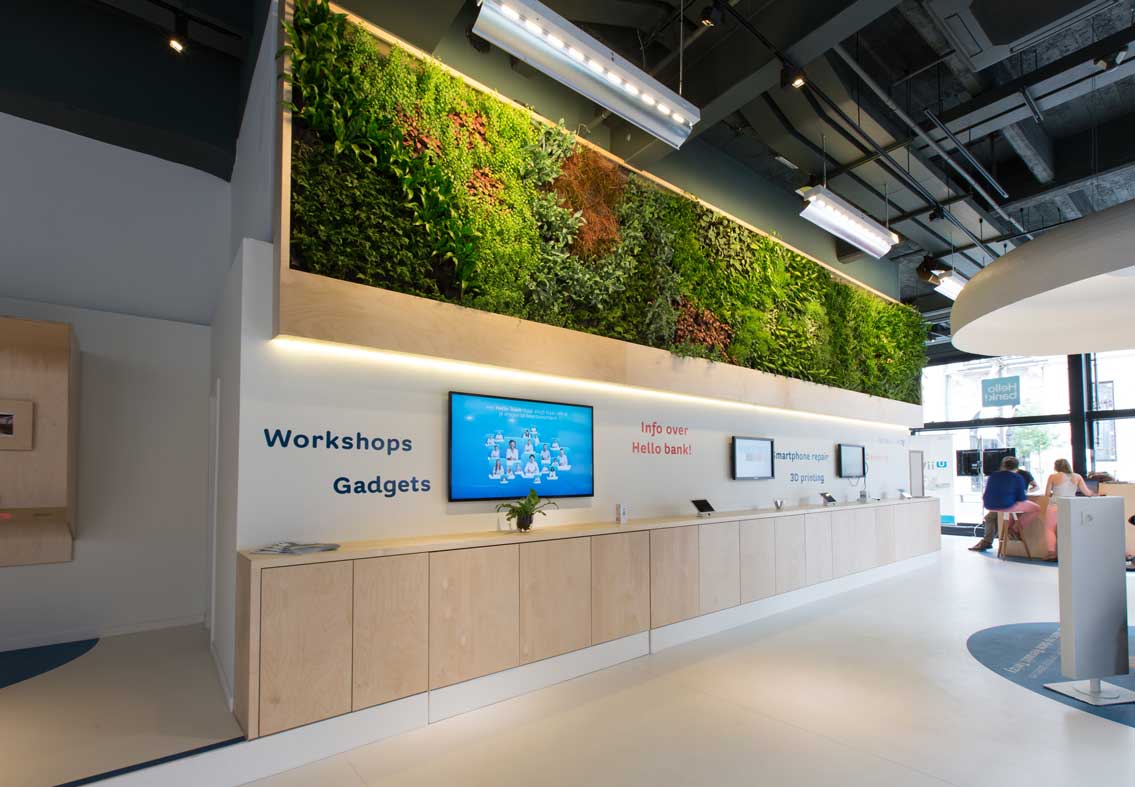 Next to these would be separated ‘customer corner’ booths in the same design, with member application screens, on which existing or new clients could update themselves or apply to Hello bank’s services. A gadget corner informed people about mobile gadgets, such as virtual keyboards, window working chargers or Bluetooth controlled robots.

To make feel people extra at ease, we included a bar in cooperation with the locals of Coffeelabs, with a counter and accompanying tables at the space’s windows. At these seated tables with built-in tablets, people could charge their phones and laptops, access free wifi, or just gaze out into the shopping street to take a break. Coffee, (ice) tea and sweets were served in customized Hello bank cups. Above the bar, a video wall of big LED screens would list Hello bank’s services and features in an accessible way.

A binding element of the space came in the form of blue round pvc stickers on the floor, which guided customers functionally around the space, but also informed them as they went along in a clean and spontaneous way, further underlining the experience aspect.

To attract young customers, we included a full-on Tomorrowland pop-up stand with a functioning DJ booth, where people could engage in a contest to win presale tickets.

In the middle of the room stood the space’s biggest and most immediately striking element: Renault Twizy, a mini car that was also part of a giveaway contest for customers. It was lit up by a striking dome of light above, and placed on one of the blue stickers that reflected Hello bank’s style image. All info on the car contest was to be found on the meeting desk’s touchscreens. 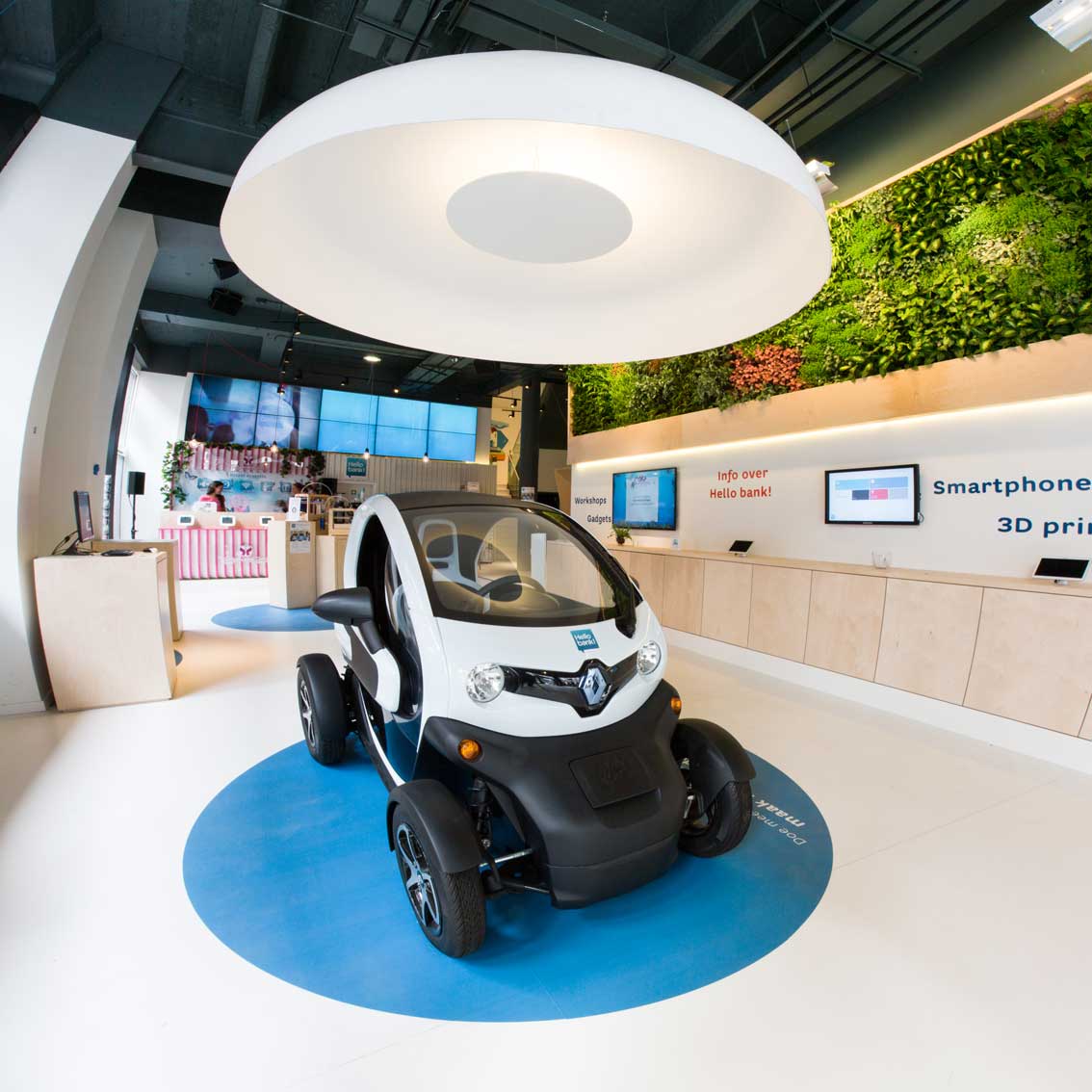 On top of all this, workshops would take place at the space as well. A 3D printer would take scans of visiting people, who could then win a 3D miniature figure of themselves. Phone repairs and sleeve customizations would be done on-the-spot by iPhone Doctors, and graffiti and t-shirt printing workshops were organized regularly. People who wanted to know more about how to design an own app, or set up an online magazine or website, were right on the spot.

The first floor of the building functioned as a lush co-working space with tables and chairs, where people could meet in ease to work on their own project. In the other separated half of the room, readings on various topics (work, money, lifestyle, fashion…) were held every week. An additional part of the floor would home a monthly pop-up shop by a selected local Antwerp talent. Even a hairdresser and various artists-in-residence (photographers, game developers, visual artists) were not overlooked.

Antwerp’s pop-up space was such a success that Hello bank decided to put up a new one in Brussels. The user experience of the first space allowed us to fine-tune specific aspects, content- and design-wise.

Various features of the Antwerp space returned in Brussels. The lounge corner where people could chat or relax, the subtle plants on the walls (and ceilings this time), 3D scanning (with a holocube) and t-shirt printing workshops and contests, as well as the co-working space with free wifi on the first floor: all of these were reprised in an updated setting and form. And then there were some novelties.

A new kind of turntable

First of all, at the entrance of the Brussels pop-up space, people received a wristband, with which they could register themselves and scan their data on a built-in tablet. Using this wristband, clients could collect points at the various stands with touchpoints, in order to win free giveaways.

The most important update however, was the new custom designed round interactive table we put up, as a main eye-catcher in the first part of the room. It had a stylish wooden base, built in to the floor with steel and concrete, with lights shining through as an added visual effect. Its metal bearing rings carried a round plexi tabletop that functioned as one big digital interactive screen.

The table served as the central part of the pop-up space and was divided into four separated compartments. An informational part was the first step, as a welcome to everybody who walked in. Waving their hand above the sensor-triggered table, people could access various digital screens with inside information. A second section highlighted Hello bank’s general program, platforms and sub brands, the third part focused on 3D scanning, and the fourth compartment was all about game and music activities. 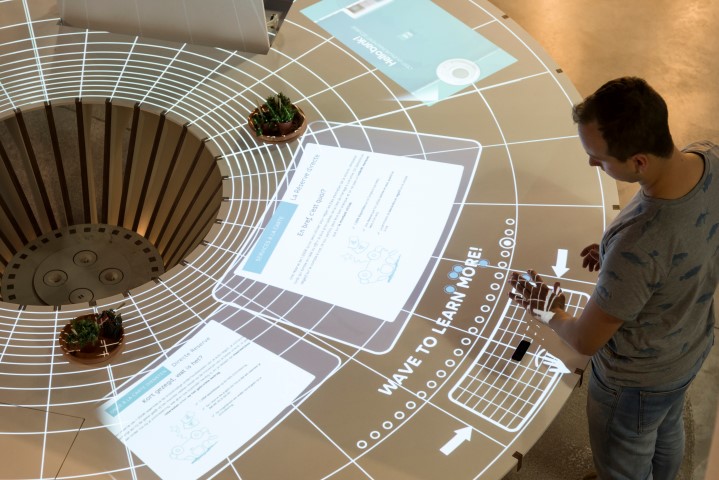 With its attractive hand wave features, the board was designed to be an externalization of the Hello bank world, raising the sense of playful community building among customers and other visitors. In general, it was meant to be a visual and technological draw, as well as a pragmatic client guide, fluently preparing people for the touchpoint trajectory that could be followed in the space.

Obviously, there were some other new extras in Brussels’ pop-up space. A digital Fitness Corner (with a motion tracking sensor screen) and a Healthy Food Corner were integrated, and all the custom seats in the relax area were newly designed, based on the Hello bank logo and colors.

Also, an interactive wall with conjoined screens, named the ‘lifestyle indicator’, invited clients to play games by pointing and waving towards the screen. Next to this, a Face Morphing device allowed visitors to have fun by digitally changing their looks.

For the third pop-up space in Liège, most elements from Brussels returned. The interactive table remained the centerpiece of the visitor experience, but we had a renewed version made, with a white laminated wooden base and bearing rings, underpinned by steel wires for extra stabilization. We also provided a series of newly designed wooden lounge chairs and stools to quirk up the room. 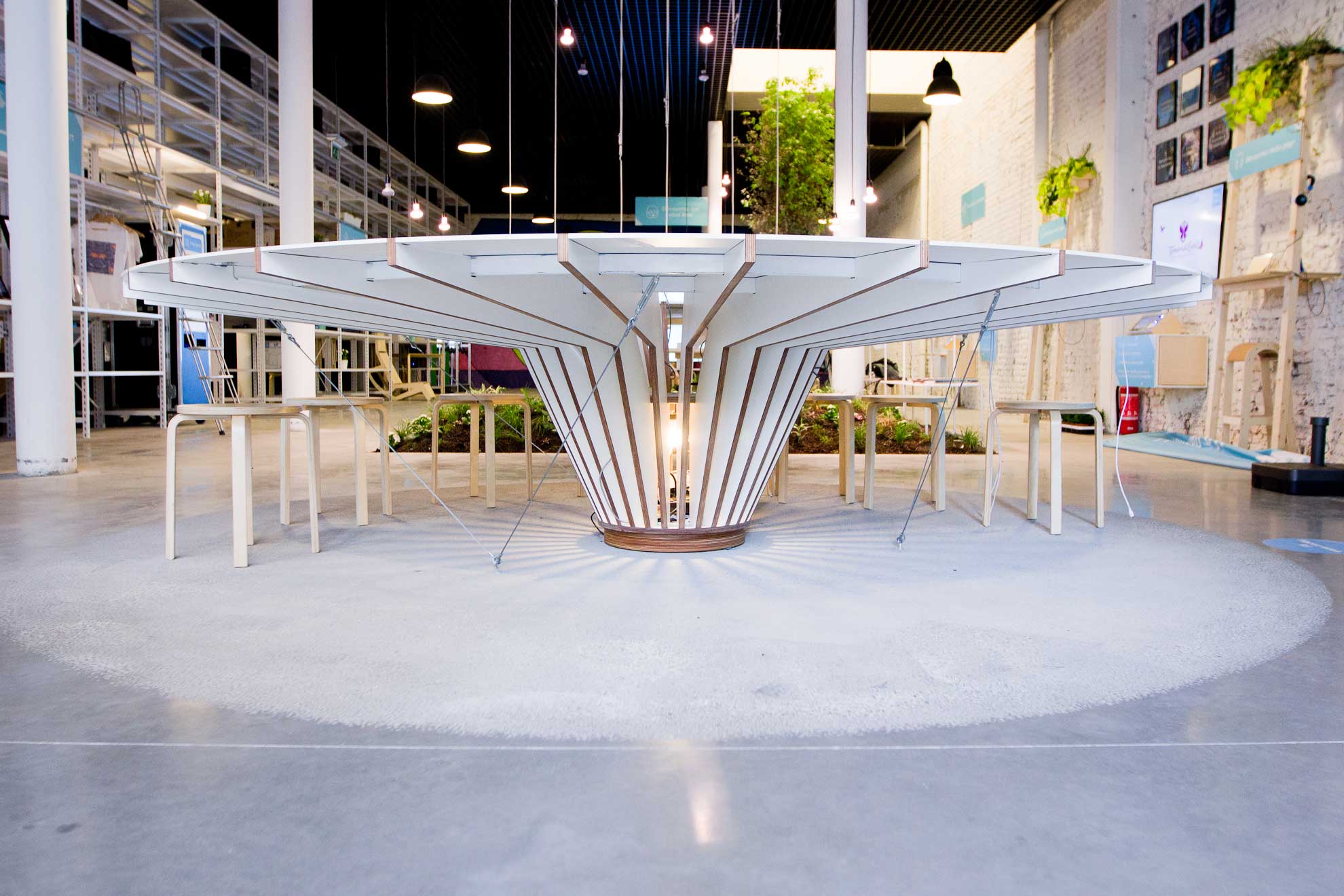 The plants we integrated this time were presented in small wooden boxes with glass windows, attached to the walls. We enhanced the green concept by adding a couple of extra ‘inner garden’ spots with plants and flowers in the building – one of which even had an actual tree in it.

The necessary hi-tech was present as always: there were various screens that could be controlled by wave functions, a fitness corner with an interactive screen that tracked movements, ‘Hello play’ game tablets spread across the building, and there was even one video wall with sensors which we made rotatable, for an extra level of physical interaction. On the first floor was a game corner for kids, with pads, tablets and electronic robot toys.

One of the novelties we introduced in Liège was the so-called ‘mega rack’: a ceiling-high, long white metal rack that filled the bigger part of one of the space’s walls, to give it a fresh and light warehouse-like look. The Game Corner (with X-boxes) and the 3D Space (with 3D-printers and holocube) were integrated into this rack, as well as the t-shirts that could be won via workshops. It also served as a storage space for extra chairs, and it gave way to the information desk at the entrance. 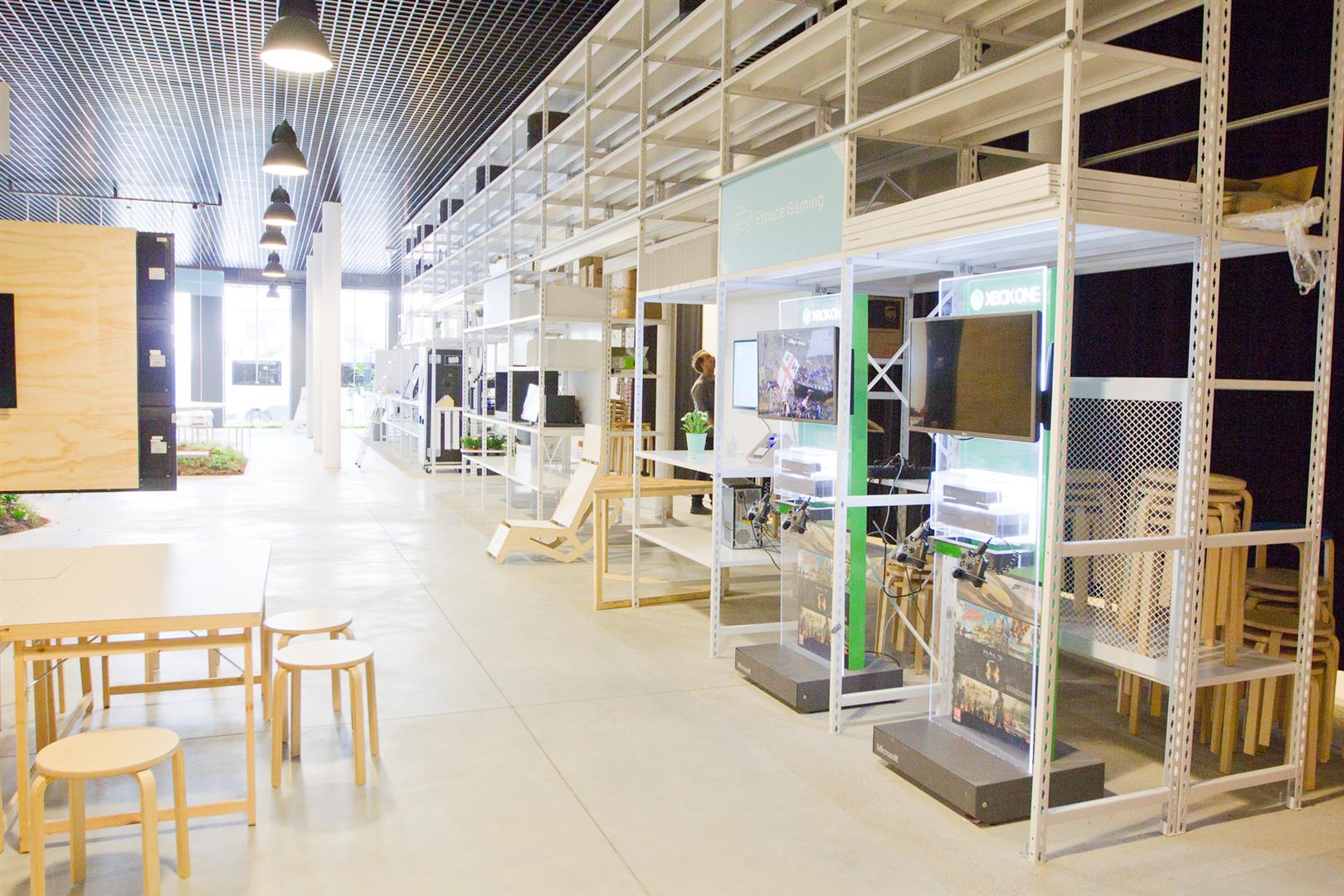 Finally, a new activity we came up with was the ‘music swing’: a swing that clients could ride to activate musical notes and themes, depending on the speed and succession of their movements. There were three swings next to each other in one of the inner garden pads, so people could communicate musically in a light-hearted, relaxing way. 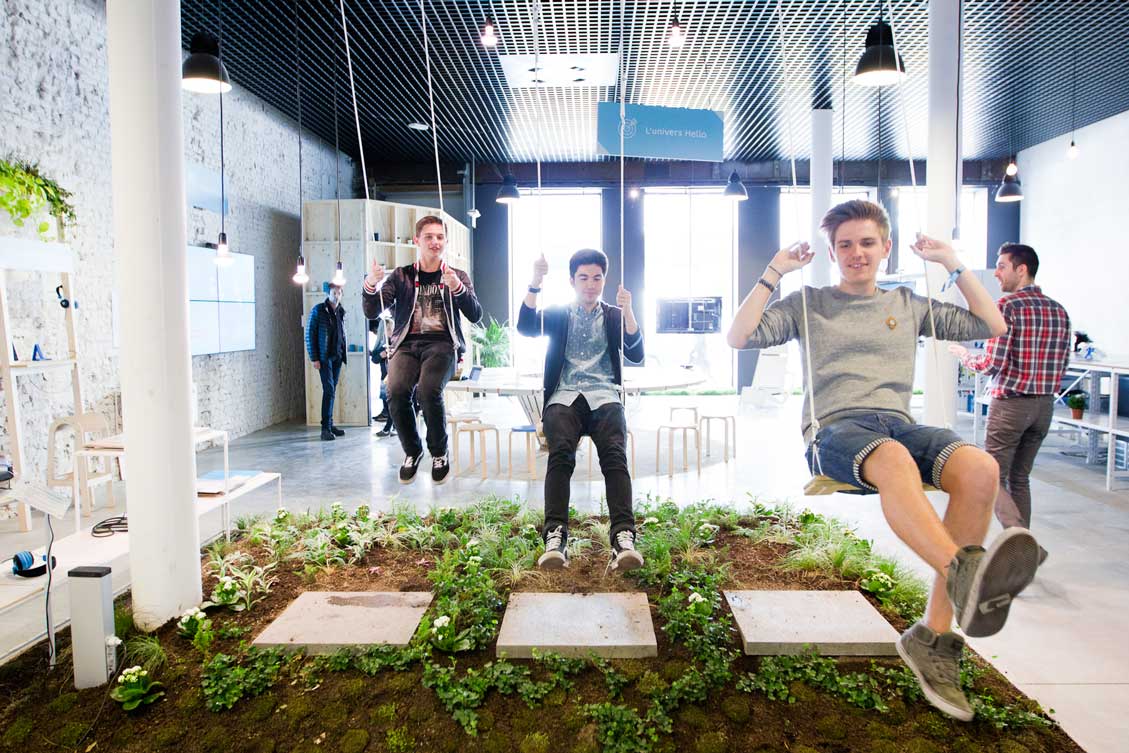 All of our work was turned into a nice result due to a fluent collaboration with some fine expert organizations.

As said, the underlying concept and ideation for the pop-up spaces was put up by trend research office Trendwolves from Ghent. The sensors and programming needed for our interactive table were prepared and installed by the crafty gents of Antwerpian experience design studio Beyond, and all necessary coding and animation were realized by the interactive installation companies Lab101 from Antwerp and Lifemile from Russia.

Hello bank considered their pop-up spaces to be a general success. The Brussels space attracted no less than 50,000 visitors in only 6 months. For them, the pop-ups were a modernized, hi-tech centered way to gain new customers and offer them a more personal custom experience. We’d say! 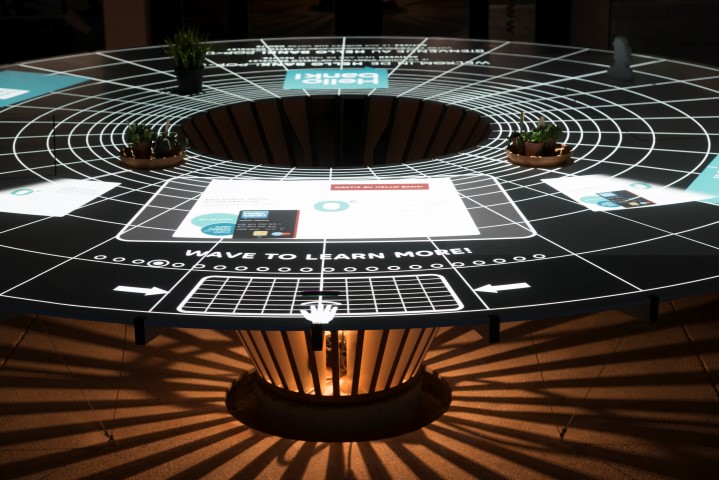