How can we start a creative conversation about solving big problems?

When life throws up obstacles, the Bump team kicks into gear. We’re passionate about bringing creative, beautifully designed solutions to seemingly unsolvable problems. Not only do we put our heads together with clients to find the best way forward, often we just launch ideas ourselves. Our goal is not always to provide THE answer to a big challenge, but to kickstart a creative conversation among others that ultimately leads to the problem being solved.

Here’s a few examples of how we’ve done that.

Sure, we’re creatives, designers and strategists. But we’re also parents with small kids. When primary schools were set to partially reopen following the first wave of coronavirus in Belgium, we wanted to help schools think about how they could bring as many kids back as possible in the safest way possible.

Together with our graphic design partners Shtick, we developed a dead simple modular DIY concept for an outdoor primary classroom and we built it outside of one of our kid’s school. Then we shared it far and wide. From the Belgian education community to leading Belgian thinkers like Geert Noels, all the way over to the New York Times, we succeeded in showing parents and educators that they could get creative too – and that the best solutions don’t always require big budgets. 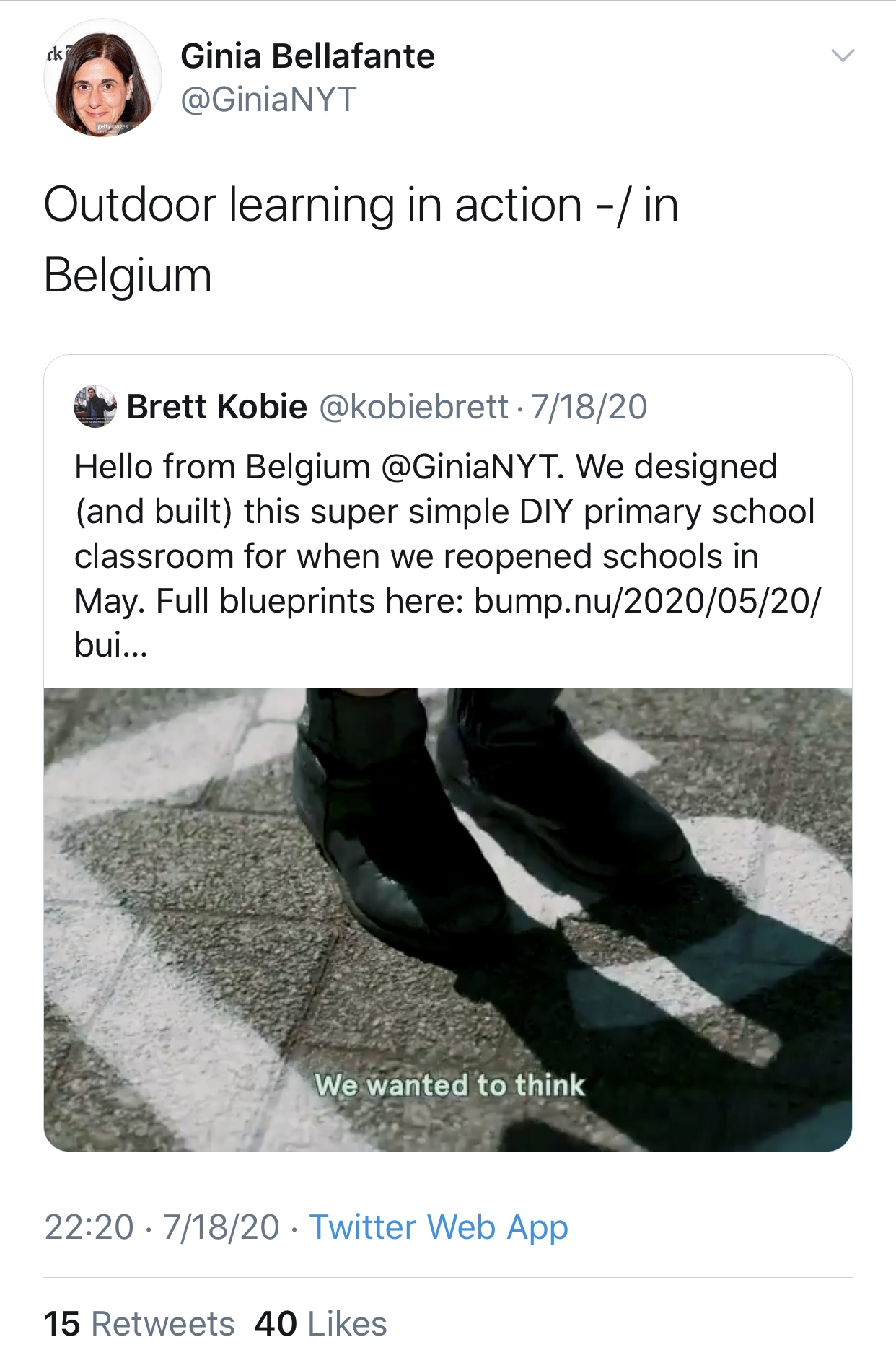 At the peak of the coronavirus epidemic in Belgium in April 2020, things looked bleak. We wanted to be proactive with solutions that could help people get back to some semblance of normalcy in a way that injected hope across our hard-hit cities. So we developed Corona Container, a low-cost open source concept to use urban public spaces to test 300,000 people in 20 days or less. We used our home city of Antwerp as an example. The idea was picked up in Belgian and Spanish media which helped us build a coalition of people in Belgium who wanted to help us make it happen. In the end, we just didn’t have enough tests to get it off the ground.

On the bright side, we helped contribute to a vibrant conversation on the possibilities for mass testing and worked hard to start one-on-one conversations behind the scenes with policymakers, test manufacturers and logistics providers. Fast forward to August 2020 and Antwerp is now the home of Belgium’s first mass drive-in testing operation which can test up to 4,000 people per day. The Belgian minister in charge of testing Philippe De Backer has also announced that mass testing operations across Belgium will be in place before the fall season kicks off.

Was our solution THE solution? No, but we did help show people what was possible and we’re mighty proud of that.

The city of Antwerp came to us with a challenge: how can we transform a hectic, male-dominated city street into a family-friendly oasis? We grabbed this brief with two hands and built what we came to call “LandMark.” in Antwerp’s bustling Handelstraat.

We built an archway to welcome you to the street with a custom pattern true to the neighborhood’s heritage and then topped it off with a simple, yet irresistible game to give children a reason to stay a while and enjoy.

Sometimes, the only technology you need to build an impactful campaign is a deep understanding of social networks and a simple, emotional message. On 11 March, after two weeks of ambiguous messages from the Belgian government about the severity of the coronavirus, we started to get worried. And our network was worried too. People knew the coronavirus could cause serious damage to themselves and others but felt that without a clear message from the government, they would be seen as alarmist for wanting to stay home.

Our Strategy and Creative Director Brett Kobie took to Twitter and LinkedIn with a simple message to employers and employees: #StayHomeBelgium. The strategy was to spark an emotional conversation in the considerably large and influential Brussels expat community and in doing so put pressure on Belgian policymakers. While the campaign itself appeared to be just two simple posts, behind the scenes was a frantic person-to-person lobbying effort, with people privately encouraging friends and colleagues to use the hashtag and also to use the critical mass built to convince employers to shut office buildings.

Within hours, the message was reposted 3,000 times across Twitter and LinkedIn with multiple organisations using it to announce they would be closing their physical offices and telling their employees to stay home. Coverage in the Brussels Times – a main source of information for the Brussels expat community – sealed the deal that this was a mini-movement of people taking voluntary action to flatten the COVID curve.

Three days after the first post went up, evidence poured in from across Europe that a lockdown was the only way forward and the closure of schools and office was announced that evening by the Belgian federal government. We now know that that three-day headstart made a difference in keeping people out of harm’s way – it may have even saved lives.

Let's tackle your next challenge with creativity.

The brands that matter today are the brands that ACTUALLY do something. We believe there is limitless potential to leverage the skills and knowhow brands, companies and other organisations have in-house to go far beyond superficial campaigns and create solutions that REALLY solve problems. Drop us a line about co-creating a creative solution that could potentially change the world – or at least a part of it.