How do we revitalize a bank’s brand identity, while also modernizing their clients banking experience?

In 2015, BNP Paribas Fortis bank was looking for a cutting-edge way to refresh their brand identity in the banking world’s market place. Also, they wanted to put a new spin on their service, by giving their customers a more personalized experience when they entered the BNP offices.

BNP asked us to redefine the concept of visiting your local bank in an innovative way – without straying too far from the business’ core, which first and foremost is to give an impression of reliability and safety. A thin line it was, but that’s exactly what drives us.

Before starting our work, we made a list of the most important ambitions BNP was after. First, they wanted to reinforce their brand stature in the market, sharpening the attraction of their image, while simultaneously improving their employees’ company pride. Secondly, they were looking for a way to address their clients in a smoothed-out and more personal, almost community-based way.

As an overarching third idea, BNP wanted to show themselves as an innovative, modern and driven organization, that moves with the times and continually invests in its branch network. To put all of these demands together, we presented our proposal for a completely redesigned BNP flagship store – first in Ghent, later in Brussels.

The flagship stores were to represent a different type of bank, in the heart of a city, serving as a network catalyst, as well as a physical reinvention of BNP’s relevance. Therefore, most things people thought of in the context of a bank visit had to be reinterpreted. The goal was to give extra visibility to the bank’s behind-the-scenes network, motivating customers to spend some more time in a relaxed bank office.

BNP’s office in Ghent’s Zonnestraat, in the middle of the old city center, is one of the country’s most visited banking spots. To give this space a completely new outlook, we based our redesign approach around the key concept of our Innovation Wall. This wall is a curved, see-through structure with integrated doors, custom made out of a metal framework, with transparent LEDs between two glass panes. It serves as an interactive eye-catcher, but more importantly, it actually reshapes the room around it in various ways.

First of all, the Innovation Wall overrides the rather enclosing booth-based structure of a bank office, by physically opening up the space in general. The wall is used as a screen that projects information and raises customers’ involvement, but it is never actually closed: one can see through it at all times, which breaks down the office’s barriers between clients and employees, in both directions.

Even though there are different spaces on both sides of the wall, they are never completely separated. This way, the wall serves as an integral phygital element of BNP’s renewed banking space experience, forming a playful open divide between the public and more private areas. A modern mixture of effective functionality and attractive transparency, so to speak. 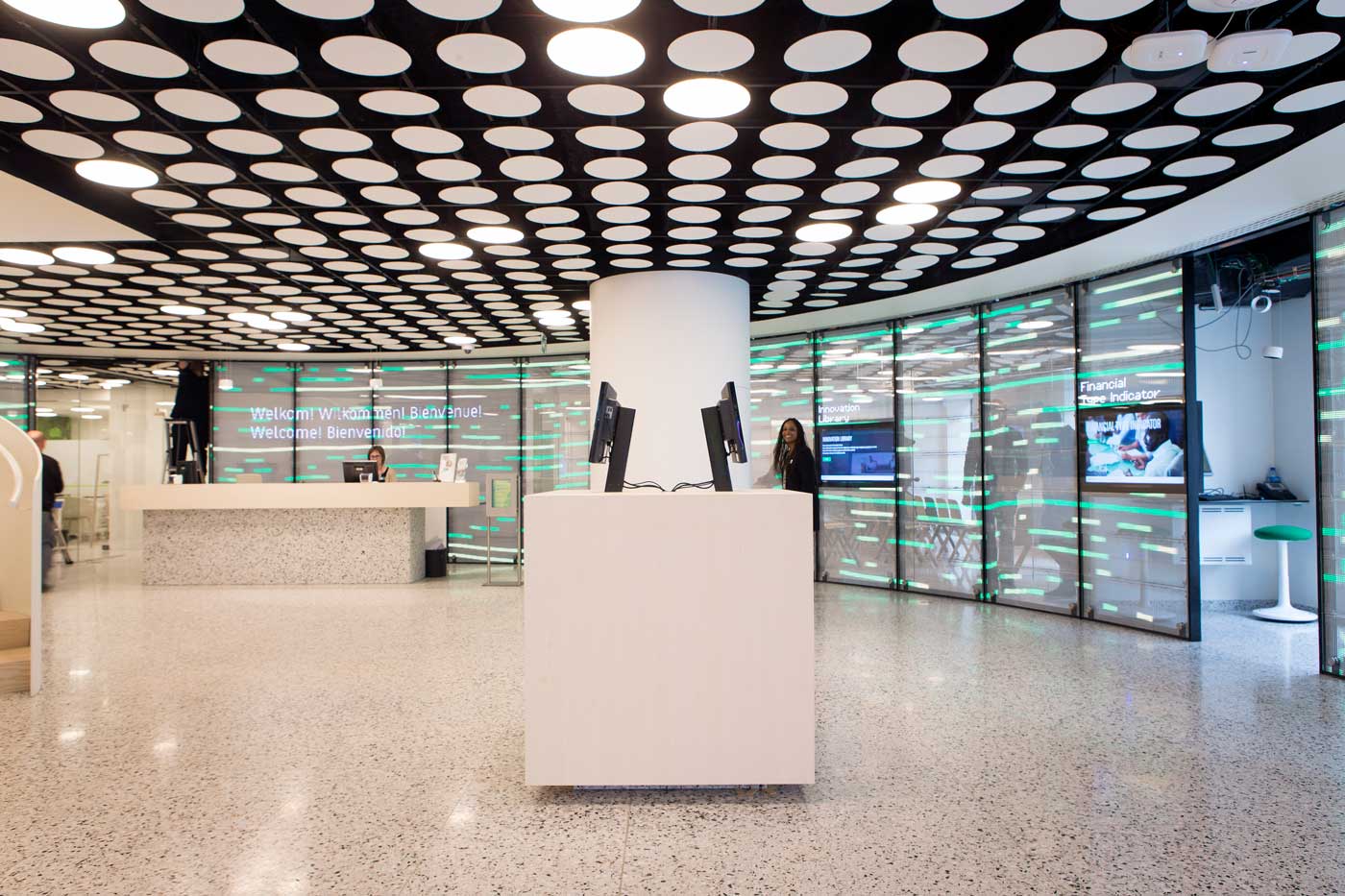 One of the main ideas of the Innovation Wall is to provide visiting clients with a specific feel and flow, guiding them through the opened up office in a pragmatic way. This starts right when they enter the building: a new revolving door makes for a fluid entrance, giving way to the centrally placed LED wall, whose transparent high-tech projections (animations, publicity, BNP’s logo) immediately draw the visitors’ attention. A projection mapping grid makes for a subtle, future oriented mood setting.

The wall functions as the dynamic heartbeat of the office – a real-time visualization of the interior. Subtle motion graphics and additional LCD displays are used to show three layers of information. A first layer consists of data driven art, shown in an aesthetic way: real-time entrepreneurship statistics, banking information snippets, the number of visitors (or coffees served), even the outside air quality, etc.

A second layer focuses on interactive visuals, that respond to the passive or active presence of the visitors. For example, people can fill in questionnaires on a touchscreen part of the wall, triggering ambient ripples to flow around it. A third layer shows practical info: event programs, meeting hours, directional arrows to guide people around, etc.

Next to the entrance is the ‘24/7 Zone’, where a part of the LED wall also visibly shines after closing time, so that it can draw passengers’ attention even at night. Another part of the wall can even be used as a display cabinet to showcase BNP-related objects and products. 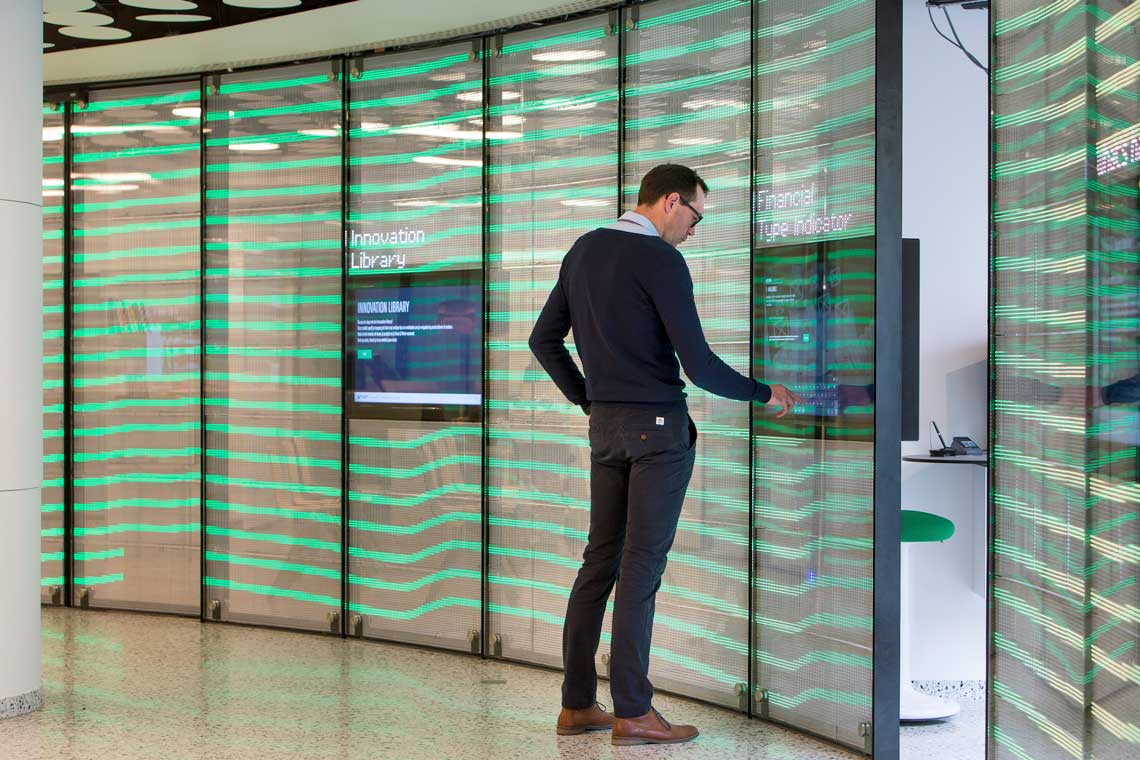 Obviously, the other office areas were redesigned in a matching way. In front of the LED-wall stands the wooden reception desk, maintained by two hosts that welcome visitors and walk them through the building. Around and behind the wall are various spaces relating to BNP’s services, such as confidential and non-confidential advisory rooms for client appointments. The dividers between the advisory rooms are also made of glass for extra lightness, and instead of doors, these rooms have free walk-ins for quick and accessible servicing.

Next to these, there are glass-walled ‘Seats to Meet’ rooms that can be reserved via a smartphone app, as well as a bigger multifunctional event zone, with a counter and a kitchenette for meetings, readings, catering, workshops, etc. The waiting area includes a coffee corner and a kids corner. As an extra fun feature, there’s even a Size Technology Booth, where visitors can go for a 3D scan of themselves.

The overall outlook of the space was obviously updated as well: the new reception desk and event counter were partly finished in ash wood, and the whole ground floor was treated with new granite marble tiles. The lights in the open ceiling were adorned with custom metal discs, which also contained the ventilation system and subtly hid the cables for the LED wall. As a second striking eye-catcher, in the middle of the room, we integrated an inviting wooden-handled spiral staircase in white coated steel.

In 2016, we renewed another BNP flagship store for the Brussels office in the Naamsepoort street, where we continued our design line with some extra additions. Many elements from the Ghent office returned: the marble tile floors, the custom made disc ceilings, the wood-finished reception desk and coffee corner, etc.

The biggest difference is that we also refurbished the first floor this time, for which we again provided various separate glass-walled spaces, such as the event zone (closed off with a curtain this time) and the renamed ‘Book & Work’ rooms. For these areas, we took the furniture one step further, by designing various types of wooden custom seats and stools, as well as clothed benches next to the windows. On the ground floor, we also included a big BNP logo wall piece, framed with succulent plants behind it. 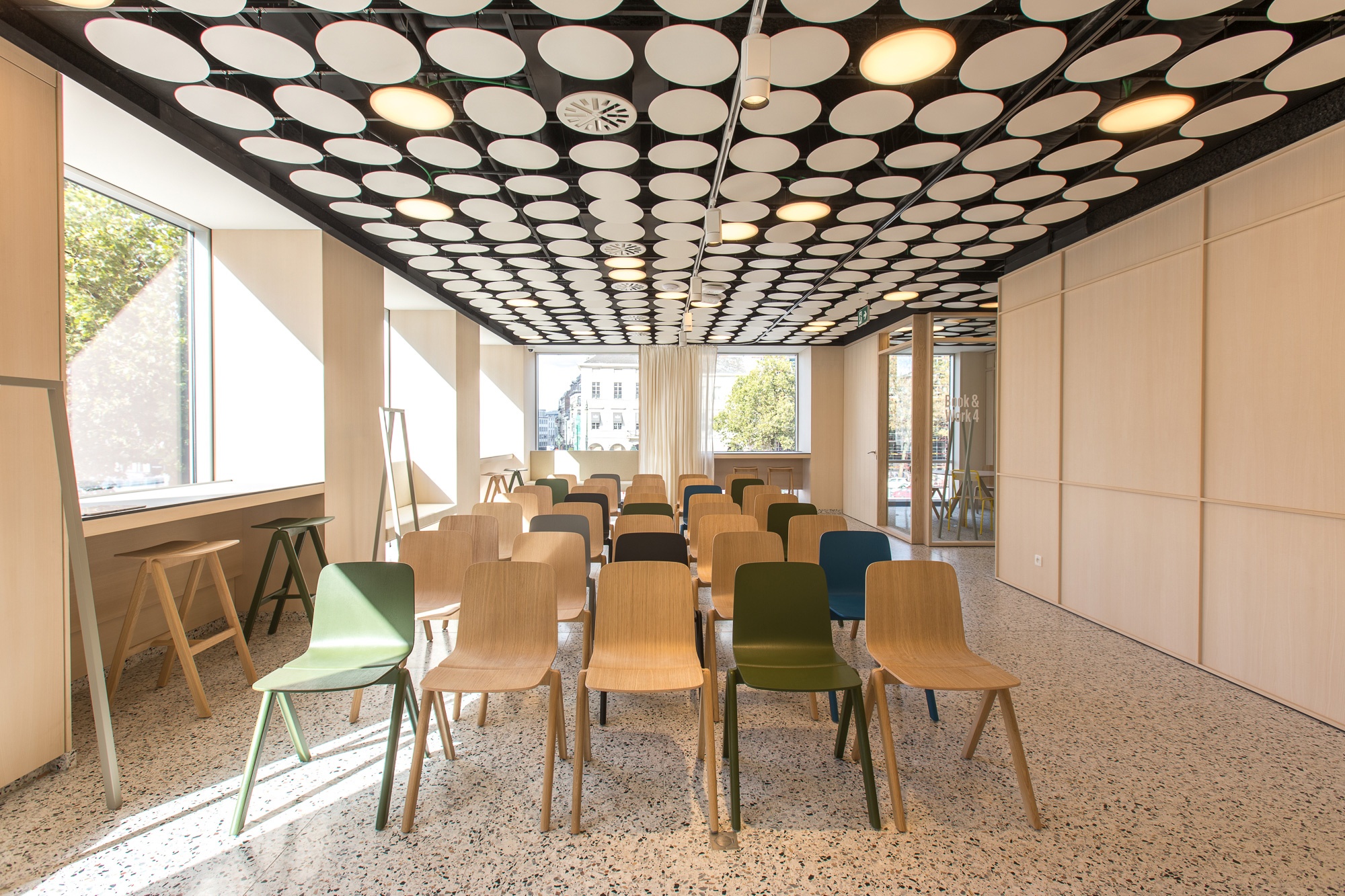 Obviously, the interactive Innovation Wall was also the centerpiece of the office in Brussels. Again, it spanned the entire main area of the ground floor, serving as a curved supporting structure for the functionalities around it. As in Ghent, the Brussels wall also sported added LCD screens and physical shelves to showcase objects.

For both flagship stores, we consciously decided to keep the redesign simple and minimalist, making the BNP branding and logo only appear on the LED-wall and the wooden desks. The screened wall made for a more direct experience for BNP clients – almost as a democratic way of giving the banking action back to the people. At the same time, the high-tech aspect of the wall accentuated the innovative character of BNP, by making the ‘backstage’ bank network more tangible to the public – while simultaneously bypassing the typical banking atmosphere. Mission accomplished, as they say.

For this flagship rebranding, we co-worked with experienced colleagues. The concept and ideation for the BNP stores was put up by trend research office Trendwolves from Ghent. LED-displays for the wall were supplied by screen rental company Novid from Kontich, and an additional lighting study for the space was done by Cone Lighting from Antwerp. On top of that, the necessary acoustic measures for the office were looked into by Form Design from Dendermonde, and the HVAC (heating, ventilation and air conditioning) accessories were tackled by Studiebureau Paul Vanden Berghe from Ghent. Cheers, lads. 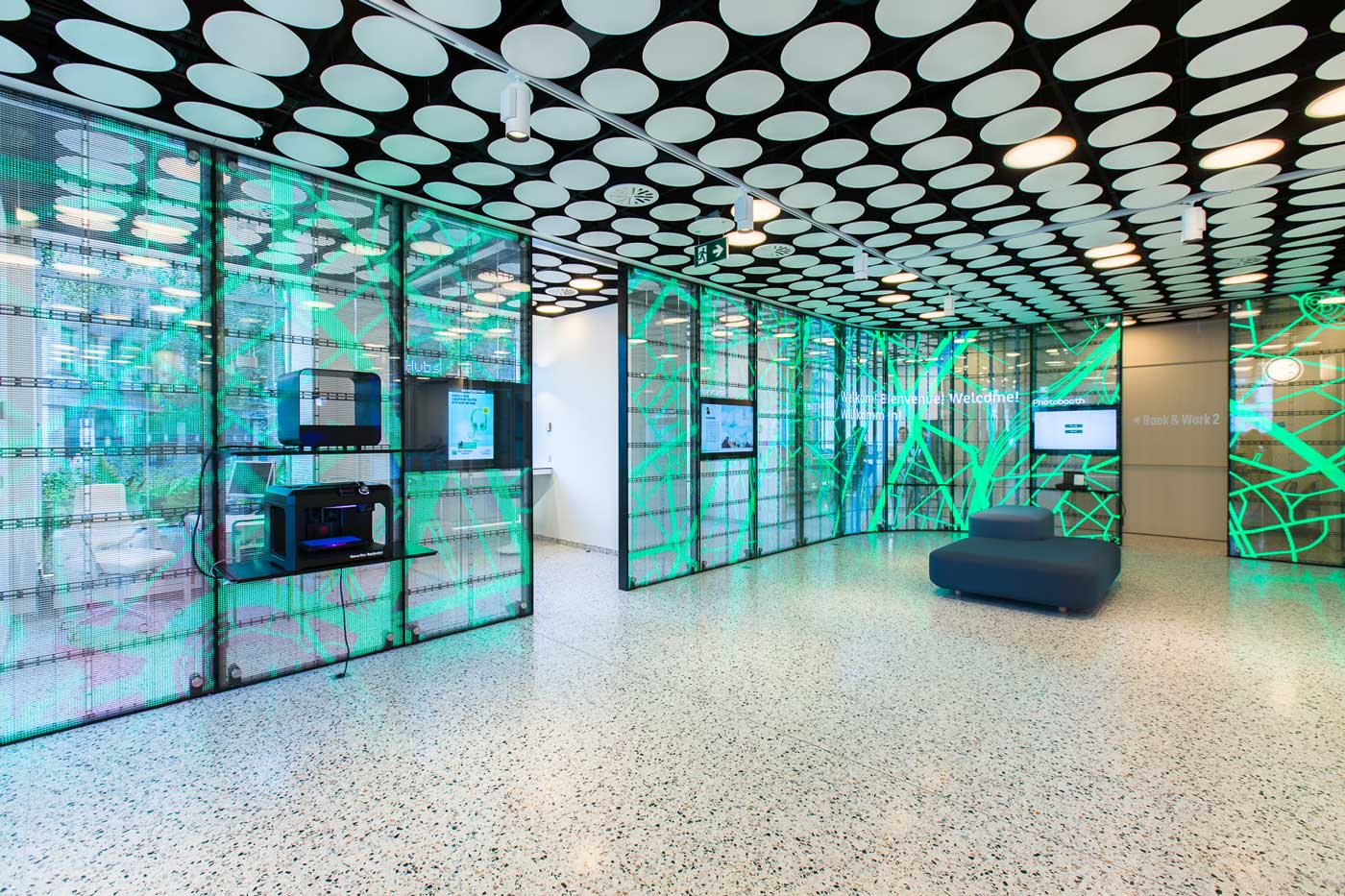