Looking a PDF of this case,
to read some other time?

Here you go my friend

How can we preserve the best parts of office life and still keep everyone safe?

An office people want to spend time in.

Offices across Europe are re-opening after an unprecedented period of anxiety, complexity and just plain strangeness really. Bosses across the piece are now wondering what an immediate return to the office should look like. They want their staff and clients to know that they care - that they've put serious thought into creating an environment people will want to to spend time in.

“I don’t just want to randomly plonk down some masks and hand sanitizer and expect that it is suddenly a safe and inviting office space. Why would anyone want to come back to that?"

That's what we heard from James Stevens, Managing Partner for Rud Pedersen Public Affairs, a mid-size consultancy in Brussels.

"Instead I want to think creatively about how to use the office space safely to allow the moments and interactions that mean the most to the team like team meetings and brainstorms, shared meals...a Friday drink.”

With our marching orders in hand, we set out to find the simplest, most creative design solution to deliver in-office experience James was after.

Experience your arrival from the lift through the office in this one-minute clip.

The running man as our north star.

Anyone who's visited Rud Pedersen in Brussels has met "the running man (aka "the walking man")" In fact, they've probably met him twelve times - across the series of paintings that adorn the consultancy's corridors and conference rooms. Given his stature as a would-be office mascot, we decided to use the running man as the central figure in smart design touches to help the whole thing feel more like an organic extensive of the existing office decor, rather than a clumsy, overblown off-the-shelf social distancing set up.

We transformed the running man into a simple icon, which became a sticker used to guide people through the office, noting the safe capacity of each room in the office. One lucky break: in the office's main corridor, the running man paintings already hang at intervals that mark a safe distance. 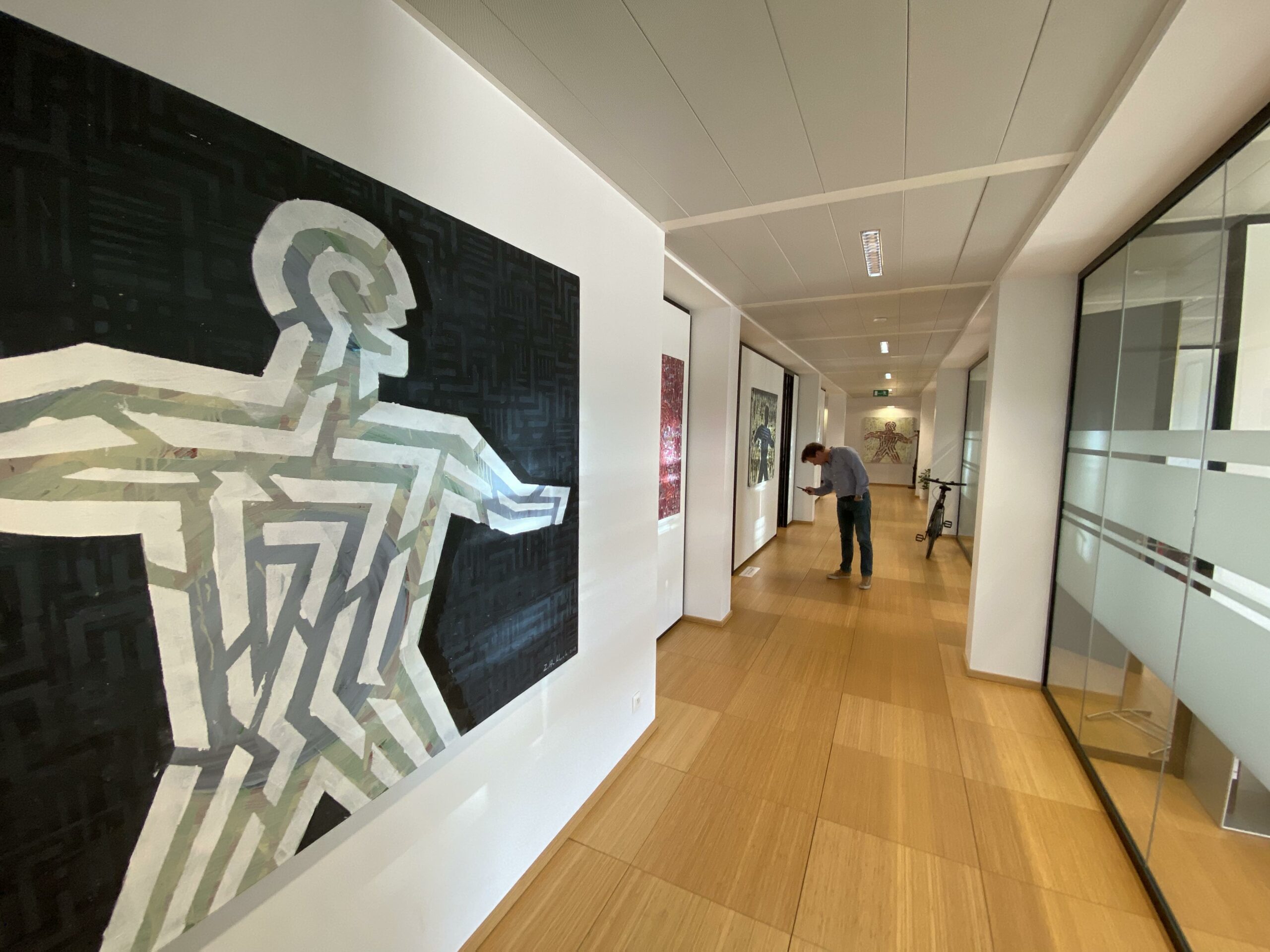 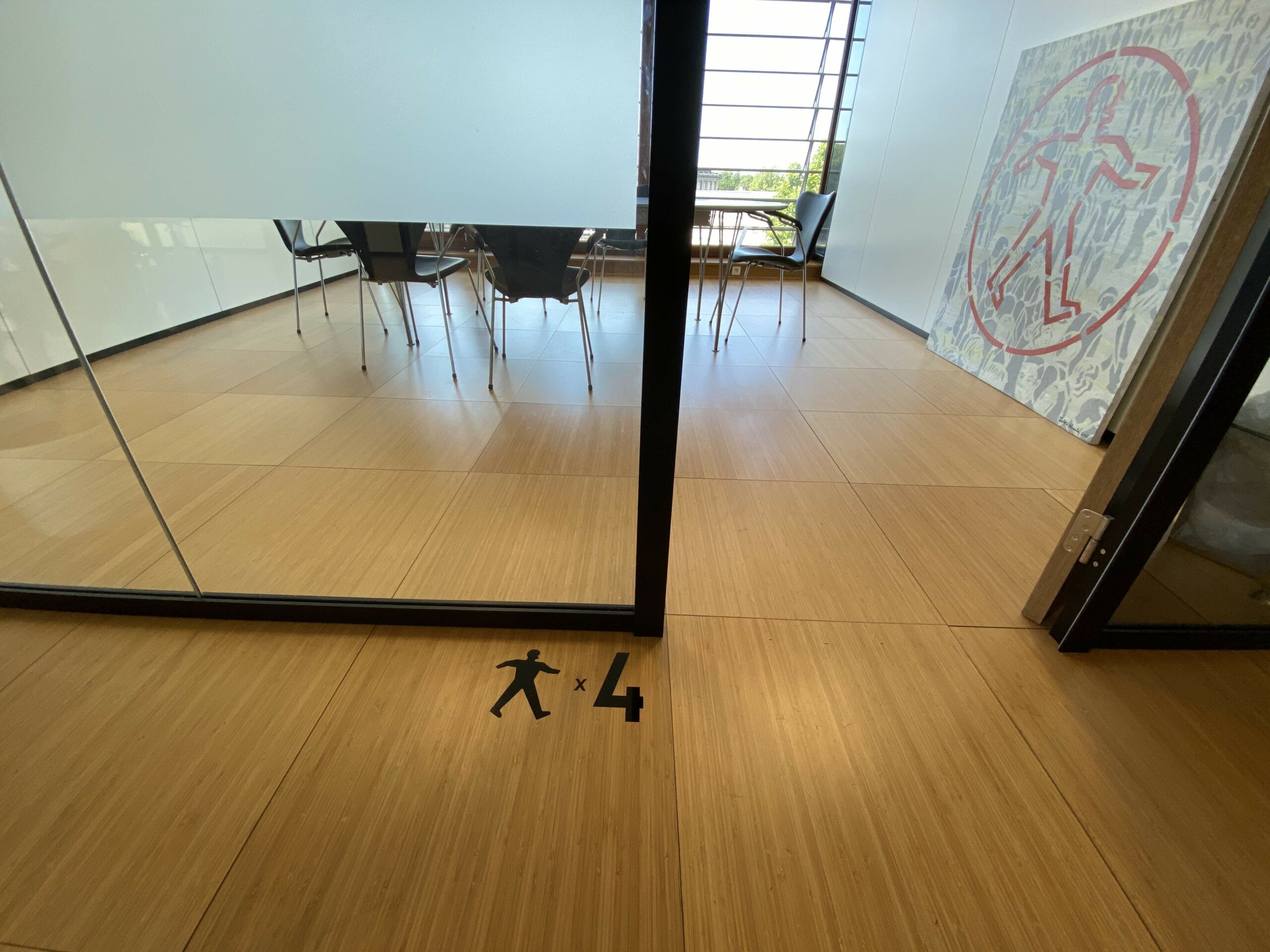 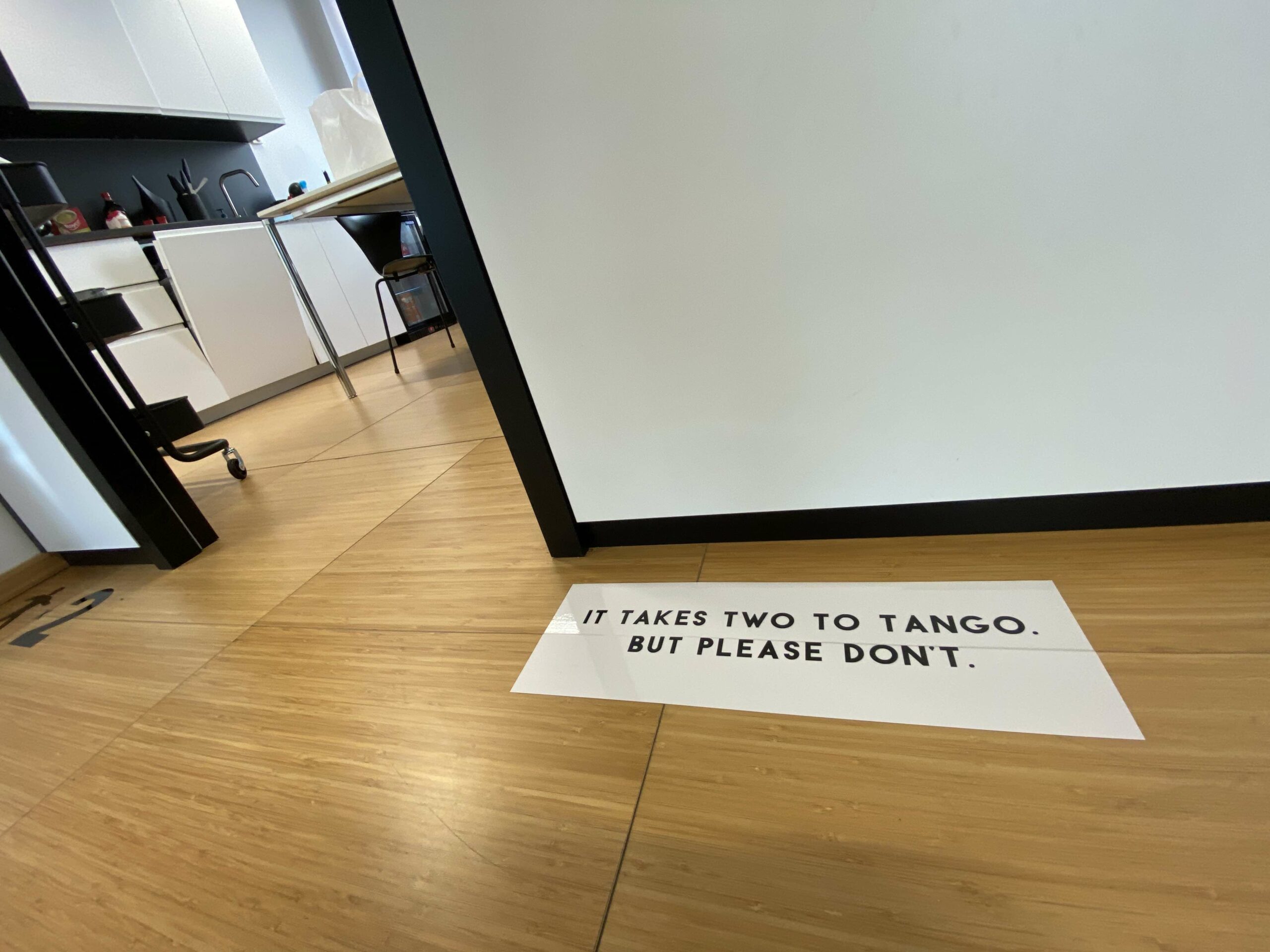 Team meeting and Friday drinks? We've got a space for that. Two, actually.

The office floor plan had one big problem: there was no place to naturally fit the whole team for a regular team meeting or well-deserved Friday aperitif. For the Friday libations, we crafted a gamified two-group system with clearly marked areas for two groups of six people to gather with a placeholder for a nicely stocked ice bucket in the centre of each circle. Ahead of each get together, groups are assigned and one person from each group has to work with the other ahead of time to come up with a game that forces people from the two groups to alternate safely throughout the drink. 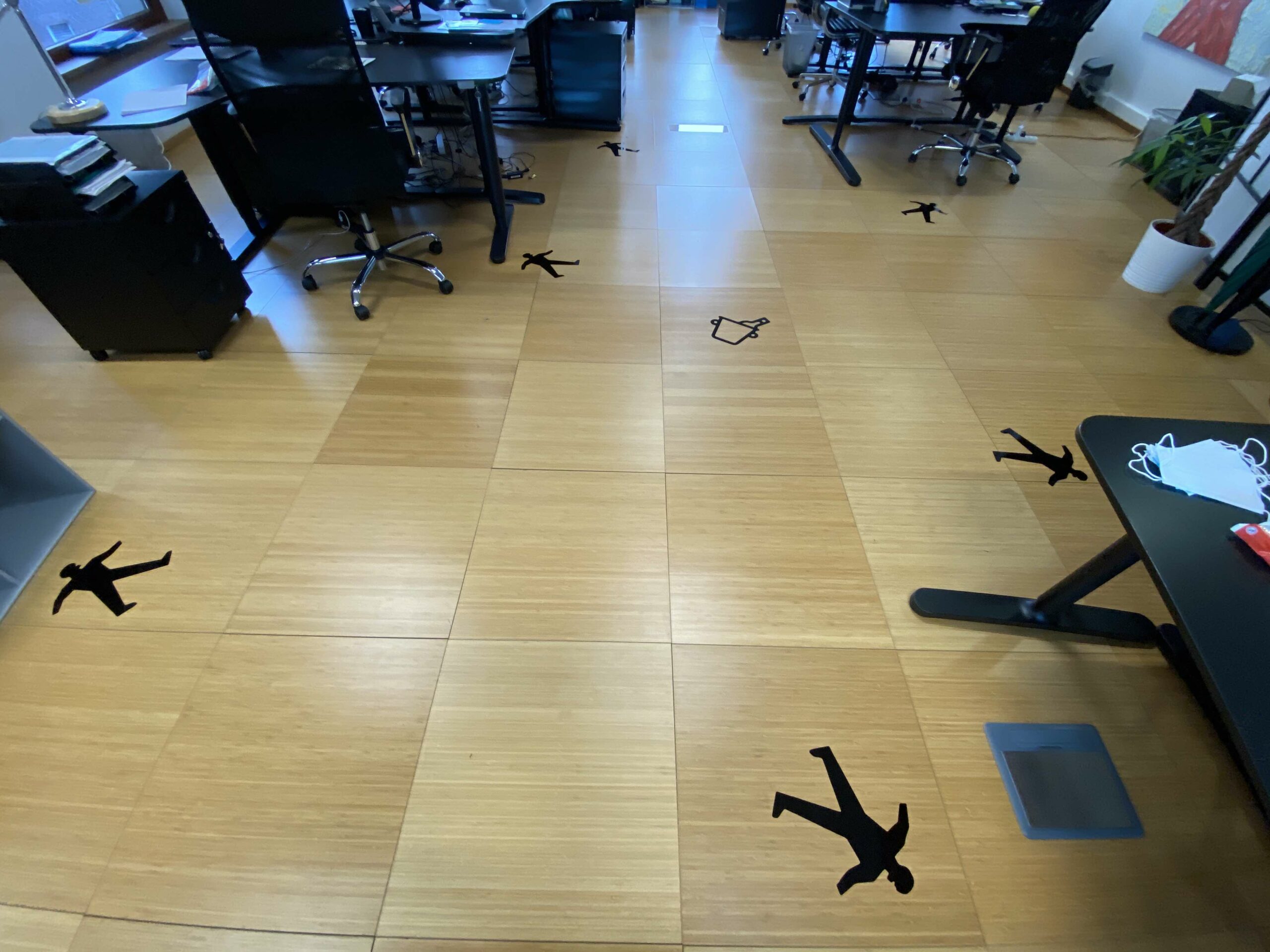 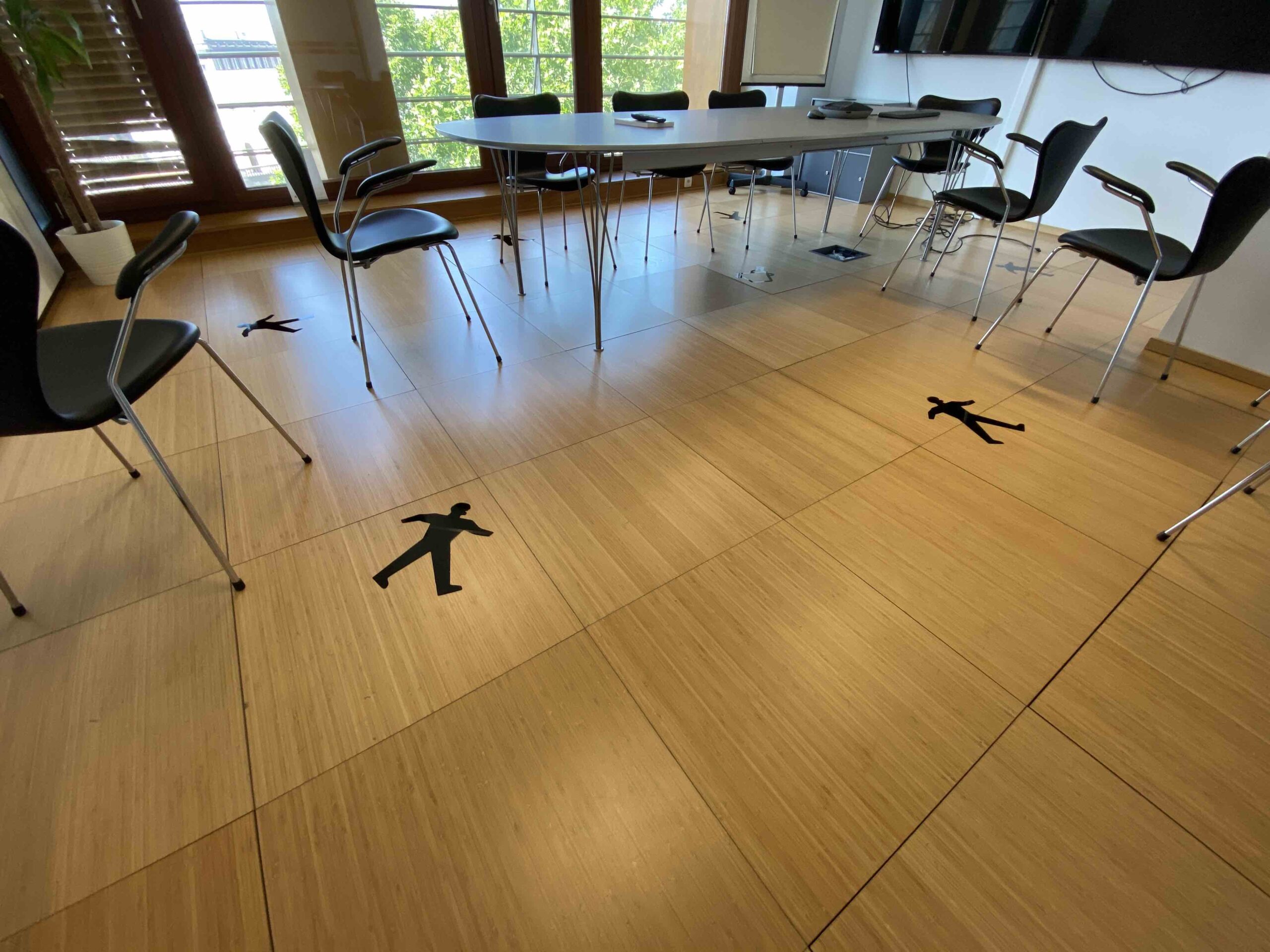 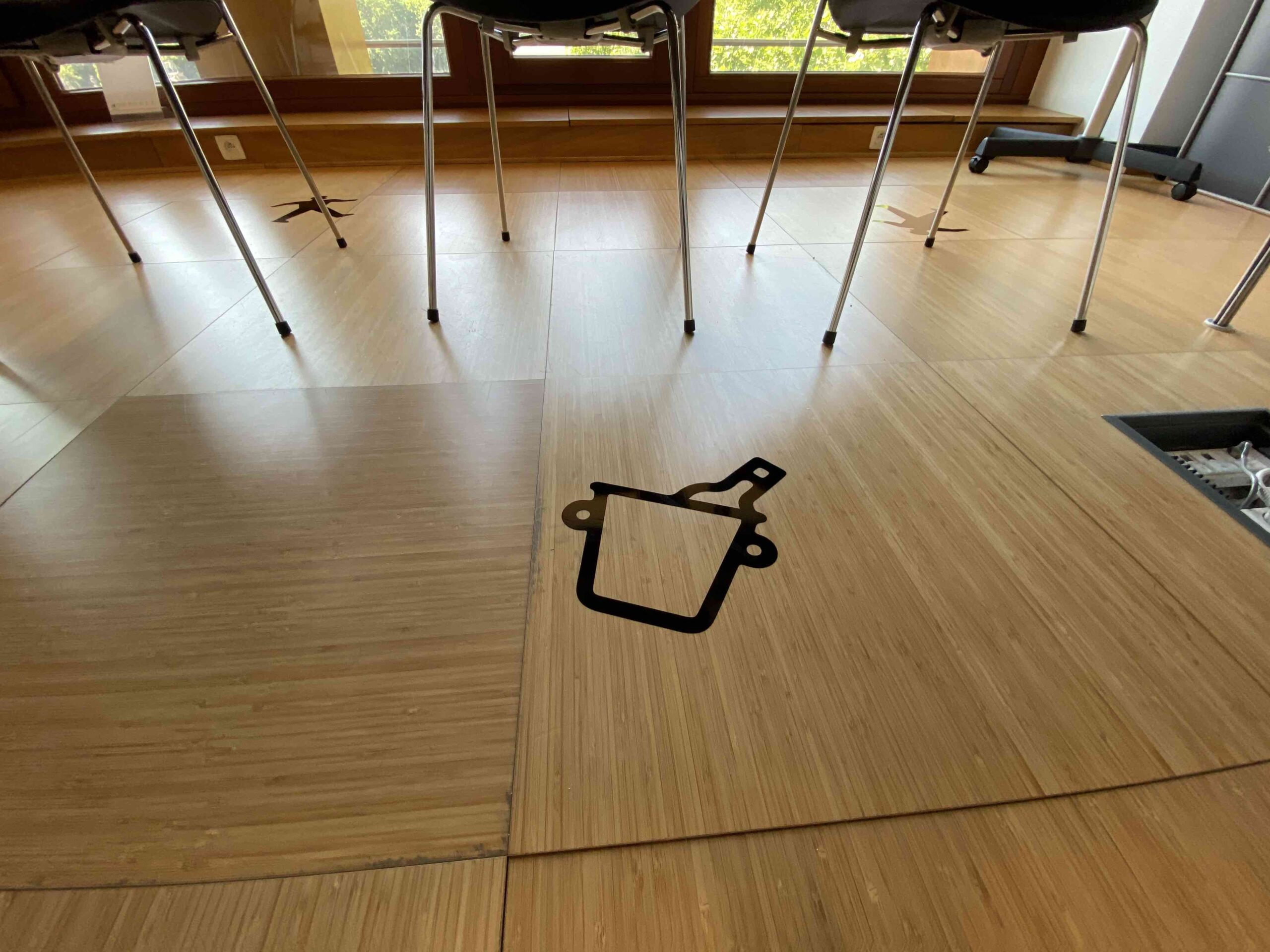